Tips and Tricks for Preserving Homegrown Fruits and Vegetables

It would seem only fair to begin this article with a passing reference to Nicolas Appert. I know, most of you are thinking: Not him again. For pity’s sake, he’s a household name – there’s nothing more to say.Well, that’s right, but there just might be one or two of you out there who need a gentle reminder.

‘Armies march on their stomachs.’ A tried and tested saying. Except that in the early years of the 1800’s, Napoleon’s armies were grinding to a halt. Rotting food was inflicting more casualties than anything the enemy could procure. Then along came Monsieur Appert.

Inspired by the French military’s offer of a prize for a way to conserve food for transport, he worked out the connection between heat sterilization of food and vacuum sealing against deadly germs. He placed foodstuffs of various kinds in glass jars, sealed them with cork and sealing wax, then placed them in boiling water. This procedure was to win him the military’s 12000-franc cash prize in 1810, but only on condition that he made public his findings. And so was published the first cookbook of its kind on modern food preservation methods: ‘The Art of Preserving Animal and Vegetable Substances.’

Even a modest backyard garden can result in an overabundance of homegrown fruits and vegetables, leading to wasted produce. You could of course stuff yourself silly with it or present it to eternally grateful family and friends. Or – might I suggest – you could give some consideration to preservation, in the form of bottling (canning), pickling, drying and freezing.

Wouldn’t it be nice to eat homegrown vegetables over more of the year or even out of season? Well, home bottling is a great way to do this. Food can be preserved in glass mason jars, preferably jars with separate rubber seals such as Kilner Jars, using one of two methods: the water bath or the high-pressure canner. In both instances, heating the jars kills micro-organisms that cause spoilage and, as the jars cool, air pressure seals the lids tightly.

Use the water bath method for fruits and vegetables with high acidity. Basically, sterilized jars are packed with food, sealed and completely submerged in boiling water for 5 to 85 minutes, depending on the type of food and the size of the jars. The idea is to preserve without the use of large amounts of sugar, salt or vinegar. Fruits and vegetables to be bottled must be unbruised and just ripe.

Using the high-pressure method, it’s necessary to invest in a high-pressure canner – a normal pressure cooker is neither safe enough or large enough. Jars filled with food are placed on a rack inside the canner and as a consequence of the high-pressure the temperature rises to a much higher level than in a water bath, thus allowing the preservation of low-acid foods including many vegetables and also meats.

When stored in a dark, cool, dry location, all these bottled goods have a shelf life of about one year. It is an ideal way to maintain a more local diet all year round, rather than relying on shop-bought goods outside the growing season. Home bottling is not difficult, but the risk of bacterial growth from improperly bottled food requires careful attention to safety guidelines. One tip – just don’t use it if the rubber seal doesn’t make a popping sound on opening.

It’s surprising just how many foodstuffs can be pickled: cucumbers, green beans, peppers, onions, cauliflower, asparagus, beets, carrots, parsnips, turnips, fennel, ginger, cherries, blueberries, rhubarb, strawberries – even watermelon rinds should the fancy take you! The list goes on and on.

It’s hard to beat the sharp tang and the crisp snap of a good quick pickle, a fast and easy process that leaves the food tasting of summer. It’s as simple as boiling up a blend of water, vinegar, sugar, salt and spices then covering your produce with it and leaving for a few hours. As a tip, just develop a basic quick pickle brine, one that’s based on a ratio to make it easy to commit to memory, then, in future, you can just change the type of vinegar or sugar, use more or less spices, add in fresh herbs, and so forth. 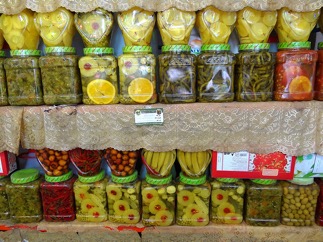 Dried fruits, such as apples, cherries and grapes last well into winter (assuming you can exercise some form of self-restraint). Use a drying tray or an oven. Dried foods can be kept for up to a year by using a vacuum sealer. 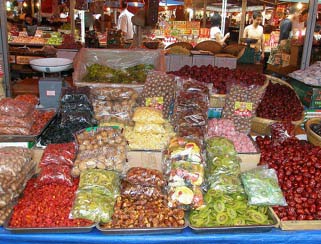 Freezing is another way of preserving a season’s bounty to enjoy at a later date. When properly frozen, vegetables and fruits retain all their flavour and nutrients. The best method of freezing is the same for peas, all bean types, broccoli and asparagus:-

In a large pan of water, boil a handful of vegetables for 30 seconds – this will stop them going brown when frozen. Using a slotted spoon, scoop them out into a bowl of heavily iced water. Once chilled, drain and scatter onto a tray lined with kitchen paper. Freeze on the tray and transfer into a freezer bag.

Whatever the method, I’m sure you’ll agree that if you grow your own fruit and vegetables, whatever the size of the plot, it’s worth a little effort to enjoy the results of your endeavours on a year-round basis. For more tips on growing and preserving your produce contact North Leeds Garden Design today.