The Landscape Gardens of Madrid 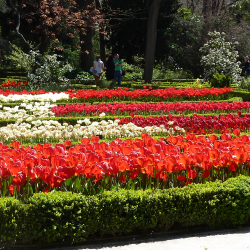 I spent the weekend in Madrid and whilst enjoying this lively, cosmopolitan city I visited the Royal Botanical Garden (Real Jardin Botanico), it was founded in 1755 by King Ferdinand VI. The tulips were in full bloom and looked beautiful – of course I’m biased, they are my favourite flower – and many people were taking photos of these vibrant blocks of colour. I imagine they were planted in much the same way as the bulb fields in The Netherlands, a sight on my to do list, but on a much smaller scale. There were beds of daffodils that would have been equally as dramatic a few weeks earlier.

If I can I will visit the botanical garden sporadically to see the diferent plants at their best. The next flowers to bloom are the peonies, these wonderful blousy flowers are a welcome addition to any garden, they appreciate growing through an easily available frame as the heavy flower heads can cause the stems to droop.

If the frame is put in position when the plant is about 20cms high then it will grow into it and be invisible. This tactic can be used for many perennials, especially the taller species such as Hamamelis, Rudbeckia and Echinops amongst others. In a garden I used to maintain I would erect netting and poles (green plastic covered metal) across most of one of the borders about this time of year before the plants started to fully grow and I could no longer get to the back. For a few weeks it could look a little odd but as soon as the plants grew it was more than worth it.

But back to the botanical garden, it is divided into sections, I was particularly interested in the edible area, trying to learn the Spanish for vegetables and grains, the latter of which I don’t remember many, they’re not something I knew in Latin so had no reference point. I am surprised that Spanish being a Latin language it doesn’t follow it more closely. 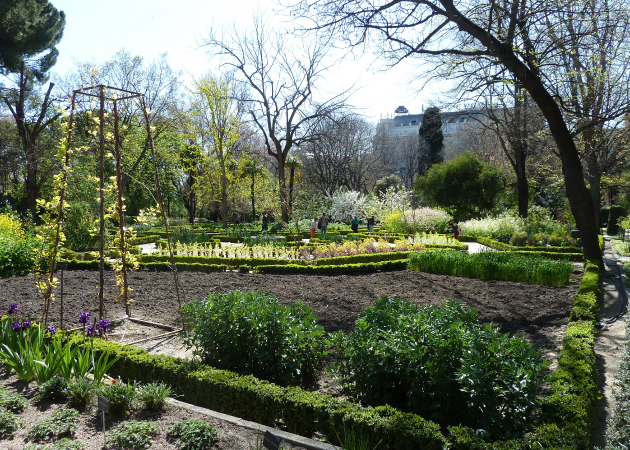 Amongst the perennials the irises were starting to bloom in a rich, velvety purple. The obelisks covered in roses and Actinidia were striking, the design was simple and I liked the way they were trained, spiralling around the structure. It was interesting to compare the plants found in the centre of Madrid to those in England, the winters are similar, cold and can be wet, this winter especially so, but the summer heat is unforgiving and the plants have to contend with virtual desert conditions, already in May we have temperatures of 23 degrees. I hardly dare to think what it will be like in July and August. Plants can be stressed if their conditions alter too much through the year, one of the problems of recent years in the UK has been the long, wet summers, the plants have their ‘feet’ in water for extended periods of time and literally ‘turn up their toes’ and die. Many of the plants in the botanical garden are those found commonly in English gardens so I don’t know if different species have been bred to cope in the dry, hot summers and cold winters.

There is a hothouse which was abit hot considering the outside temperature but the lush, jungly plants were beautiful and so different to what is found in your average garden. We ended in a small exhibition hall with some striking oil paintings, one of my favourite was that of different coloured petals. It’s great to visit new gardens and experience Garden Design that can bring you new inspiration. 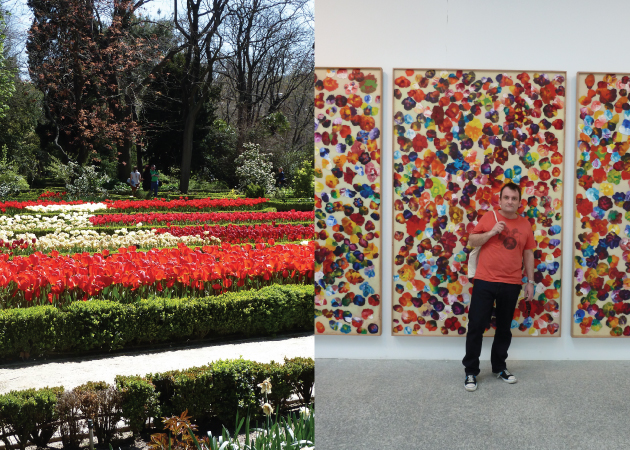