The Deadly Beauty of Poisonous Plants

Plants are living organisms and all of them contain some level of toxin for defence. After all, they cannot run away from their predators, so nature has developed several different ways of protection.

Some have spikes, some a sting (think how painful a handful of nettles can be), some have an unpleasant taste or smell, and others have evolved to the point where they are actually poisonous. The danger to humans can range from a mild skin irritation to severe sickness, or even death. Over thousands of years animals and humans have worked out which plants are safe, which ones are not, and which ones are lethal.

The British countryside is famous for being lush and green; a patchwork of fields bordered by hedgerows and stone walls. All of which is all true. But lurking within this verdant beauty are things altogether darker:

Wolfsbane – Also known as monkshood. It has large leaves with rounded lobes and produces purple hooded flowers. Pretty but poisonous. It is entirely possible that gardeners may plant this in their garden and be completely unaware of the potential hazards it poses. These can range from an upset stomach to more serious and dangerous symptoms, such as a slowing of the heart rate. Harry Potter fans may be familiar with this plant name, as Professor Snape brewed a potion made from it to keep Remus Lupin from turning into a werewolf. This is fiction of course, everyone knows it should have been Hemlock, but take heed of the facts: it should not be handled without gloves, and under no circumstances should it be eaten.

Foxglove – An elegant and tall purple flower and a common garden plant too. You can find foxgloves growing in hedgerows and woodlands. Eating any part of this plant will cause very unpleasant symptoms and, like Wolfsbane, it can slow the heart down to dangerous levels. 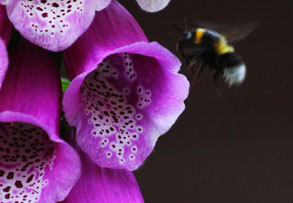 Hemlock – You normally find hemlock growing in ditches, waste-ground and river banks. It has white flowers and distinctive purple spots on its tall green stem. If ingested it causes sickness, and in the odd rare cases it can even kill by paralysing the lungs. Socrates, the famous Greek philosopher, was sentenced to death and the manner chosen for his execution was a drink containing hemlock.

Atropa Belladonna – Deadly nightshade to give it its more familiar name. This is a must to mention, for, as the name suggests, it is highly poisonous. It is found mainly in central and southern England’s countryside and is a shrubby plant with black shiny berries and a purple bell-shaped flower. Other nightshade family members, like the tomato and the potato, pale into insignificance as you would literally have to eat tons of them to cause any significant damage, whereas a few berries of the Belladonna will give you a hefty dose of atropine, scopolamine and hyoscyamine! This will knock out an adult’s nervous system and then kill. Symptoms include dilatated pupils, hallucinations, convulsions and coma, before the worst symptom of all – death. No wonder so many murder mystery novels contain death by poison!

Incidentally, belladonna translated means ‘beautiful lady’. The name can be traced back to the 17th century practice whereby women put a small extract of deadly nightshade into their eyes to dilate them. To their way of thinking this made them look more attractive!!

The Poison Garden in Alnwick Gardens

There are many poison gardens throughout the UK and Europe but none perhaps quite so deadly as the one within the famous Alnwick Gardens, adjacent to Alnwick Castle, home to the Duke and Duchess of Northumberland. In 2005 Jane Percy, the Duchess of Northumberland, moved away from plant healing and sought out hard-to-get poisonous plants to create a small but deadly space for approximately 100 intoxicating and narcotic plants. The poison garden is surrounded by 12 acres of beauty, but black iron gates with a skull and crossbow stand guard at its entrance. It is a lethal oasis into which no one may enter without a guide and educator provided by Alnwick Gardens. 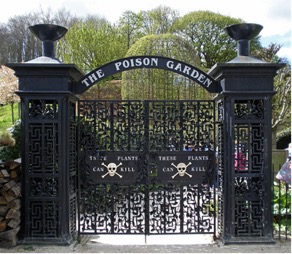 Despite the warning at the entrance, it has been known for people to ignore the rules – subsequently to be found in an unconscious state, providing a sombre testament, if nothing else, to the toxicity of the plants. Illicit plants, including the opium poppy, coca, and cannabis are also grown there; the objective – drug education. Common poisonous plants like rhubarb leaves and laurel leaves mingle with more exotic killers like Brugmansia (Angels Trumpet) which has amazing aphrodisiac properties; some consolation at least, before it kills you. Apparently, ladies of high society in the Victorian era would keep a flower from this plant and add tiny amounts of its pollen to their afternoon tea, for the equivalent of an LSD trip. I’m not sure how true this is, but it’s a great story for the guides to tell.

Due to the dangerous properties that many of the plants exhibit, those particular plants are caged. The garden is now secure with a 24-hour watch.

Wallflowers, poinsettia, snowdrops, common ivy, hyacinth and hydrangea are all well-known and beautiful plants, but all have some toxins that are dangerous if ingested. To find out more information on these plants and many more, contact North Leeds Garden Design today. 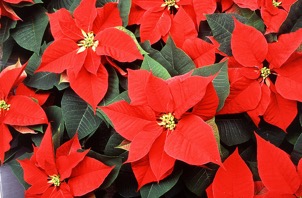