I’m a bit of a star gazer.  I love looking out across a clear night sky, somewhere deep in the countryside so there’s no light pollution.  Given the season, I thought it might be interesting to talk in this blog about stars, starry plants and starry things generally!

So to explain the star gazing geek thing:  We had a holiday in Argyll last summer and were astonished at the sheer number and brilliance of the stars we could see by just standing outside the door of our cottage nestled on the night-time hillside.  It was August, the Perseid meteors were throwing shooting stars out like crazy, it was genuinely exciting and filled the whole family with a sense of awe and wonder – something we don’t often experience.  That sense of being a tiny speck in a vast universe……….

There are several Christmas carols that refer to the Star of Bethlehem, the amazing and singular star that guided the Three Wise Men to find Jesus:

guide us to thy perfect light.

In medieval times the Star was a popular theme for Christmas carols. The lyrics often linked the Star in the heavens with Mary, the mother of Jesus, referred to as the Morning Star, or Our Lady of Light because she held in her arms Jesus, the Light of the World.  “We have seen His star in the East,” said the Magi, and they found it again reflected in the eyes of Mary.

There is a long association between stars and flowers in western culture, which I think must have arisen partly because of the religious symbolism.  Most of these names are now out of use, but many people still know Ornithogalum umbellatum as the Star of Bethlehem flower.  A lovely member of the asparagaceae family, it has umbels composed of lots of white star-like flowers in early summer.  It was originally native to the Mediterranean area – so may indeed have been known to Mary. 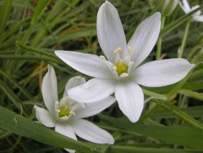 Much more recently the popular Stargazer lily was developed by breeders in the 1970s.   A hybrid of the ‘orientale’ group, this new addition to the more than 3,000-year-old lily family was so named because its blooms face up towards the sky.  Their large petals often have red or pink bursts of colour outlined in white as an alternative to being completely white.

Interestingly, lilies take us back to Mary the mother of Jesus.  Some of the most beautiful medieval paintings and frescoes, such as the ‘Annunciation’ by Fra. Filippo Lippi, show Mary being presented with a lily by the angel Gabriel . Since the time of the ancient Greeks the lily had been seen as a symbol of purity, innocence and hope, and this association would have been known to those viewing the pictures. 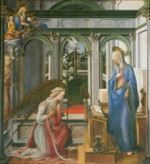 Nowadays, lilies are still used during Christian festivals, especially Easter, to symbolise similar virtues.  Modern stargazer lilies not only look and smell beautiful in the garden but are often used in flower arrangements, especially brides’ bouquets.  My local florist tells me they are good to work with because of their stout stems.  White ones still symbolise purity or healing, but the gorgeous lovely pink or red ones tend now to be linked with the idea of prosperity – rather a different take!  I wonder if this is something to do with red being traditionally associated with wealth and happiness in some Indian and Chinese cultures.

Once I started exploring the idea I realised there is a huge range flowers with petals reminiscent of stars.  Why this should be is a big topic in itself, to do with plant genetics and also insect pollination; maybe an expert in this field could offer a comment on this blog post and tell us more?

Many of these starry plants are very well known in the UK.  How about asters?  – gorgeous starry flowers in profusion in late summer – and of course the clue is in the name as ‘aster’ means ‘star’ in Greek.  Or what about the Spring Starflower (Iphieon uniflorum), a pretty member of the allium family originally from Argentina.  Moving upwards in the garden, one of the many large-flowered clematis such as ‘Starlight’. 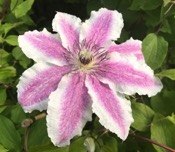 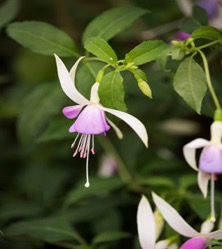 Let’s round this piece off with a nicely balanced science-but-philosphical quote from Carl Sagan to ponder on:

“The nitrogen in our DNA, the calcium in our teeth, the iron in our blood, the carbon in our apple pies were made in the interiors of collapsing stars. We are made of starstuff.”