Sculpture gardens, or parks, have a long history around the world and date back, incredibly, to 175,000 years ago – a “Neanderthal garden” was unearthed in the Bruniquel Cave in France, where broken stalagmites had been arranged in a series of stacked or ring-like structures. Sculpture gardens encompass an expansive array of differing concepts and it is gardens that contain collections of actual sculptures that will be examined here; site-specific structures (where a work of art is created in-situ and can only exist within its immediate surroundings), land art and topiary gardens will all be set aside until another time.

Perhaps the best place to start would be with one of the world’s most famous sculptors, Auguste Rodin. The Hôtel Biron is a jewel of Parisian rocaille architecture, with its park, that covers nearly three hectares, only adding to its immense attractions. It was within this park, in the overgrown gardens that he loved, that Rodin started to place several of his selected works (circa1908), together with some of the antiques from his personal collection. Male and female torsos, copies made in the Roman or modern period, after Greek works, were presented in these natural surroundings, their contours dappled by the sunlight. The first bronzes were erected in the gardens before World War 1. Since 1993 they have been regularly cleaned and treated to preserve their original patinas.

This vast park is located directly behind the palace from which it gets its name and was originally a hunting ground. In the beginning, the gardens within were laid out in a French formal style although parts were later redesigned as a Baroque landscape. The Great Parterre of this particular garden is lined with 32 over life-size sculptures, again, in the classical mould, that represent mythological deities and virtues. They lead to one of the main highlights of the garden, the Neptune fountain. In addition to this, throughout the park there are monuments, buildings and architectural follies such as a mock Roman ruin and an obelisk. It was opened to the public in 1779 and to this day can be visited for free. 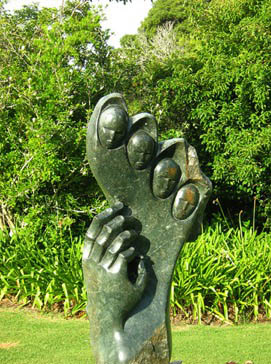 In a completely different vein now, let’s journey into Africa; South Africa to be precise. This garden is acclaimed as one of the world’s great botanical gardens and within its confines it features a permanent, but ever-changing exhibition of wonderful Mambo stone sculptures in beautiful leafy settings. At times visitors may hear, and see, a sculptor at work on a new piece. The artists express themselves and do not merely carve what they think the tourists will buy. They depict spiritual, traditional and contemporary themes as well as topical and social issues in their work. The stone that they utilize is genuine serpentine, or one of its forms: leopard rock, lepidolite, springstone or opal rock – the artists believe it has a spirit and life of its own and that they can sense the sculpture emerging. It can take anywhere from a few weeks to a year to complete an individual work.

Enclosed in a forest park and encompassing more than 75 acres (30 ha), this is one of the largest sculpture gardens in Europe with a fine collection of modern and contemporary sculptures. It was not originally part of the museum but was added later in 1961. The garden reflects Helene Kröller-Müller’s conception of a symbiosis between art, architecture and nature. The collection of over 160 pieces includes works by August Rodin, Henry Moore, John Dubuffet, Mark di Suvero, Lucio Fontana, Claes Oldenberg, Fritz Wotruba, Joep van Lieshout and many more.

For those prepared to go a little further afield, what about this park in China. It features a combination of natural and cultural landscapes and pulls together Eastern and Western cultures and arts with unique charm and style. 441 pieces of sculpture created by 397 sculptors from 212 countries and territories have been placed in the park, encompassing a huge variety of materials and styles. 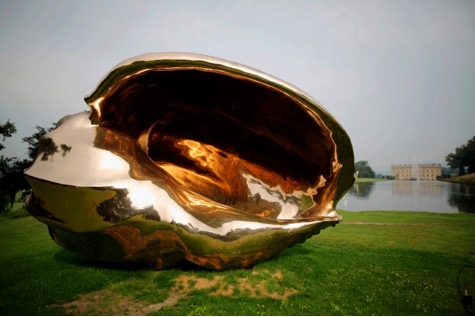 Finally, let us get a little closer to home. Whilst not a sculpture park or garden as such, the owners of Chatsworth, the Duke and Duchess of Devonshire, have collected and commissioned sculpture to be permanently sited on the estate. These include works by Barry Flanagan, Elisabeth Frink and William Turnbull in the garden and commissions by several artists in the 1000-acre (400 ha) park designed by Capability Brown. Since 2006, Chatsworth has hosted ‘Beyond Limits’, a modern and contemporary sculpture exhibition, in the gardens. It is a landmark selling exhibition, in conjunction with Sotheby’s auction house, and takes place annually in the months of September and October.

For more information on how to use sculpture in your garden, get in touch with North Leeds Garden Design today