Tulips from Amsterdam. We all know that saying, and the song. Holland, more specificallyAmsterdam, is unquestionably the capital of tulip bulbs.

You may even have visited the famous gardens of Keukenhof in the spring,along with hundreds of thousands of other visitors wanting to experience the full tulip splendour!Bold stripes of primary colours, for miles and miles. Variety and diversity, that’s the beauty of tulips;double ruffled, fragrant, striped,and every shade of every colour. You can even see them from the air as you fly into Schipholairport. Anawe-inspiring sight! 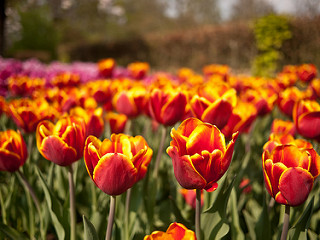 History of the Tulip Bulb

Amsterdam has been growing tulip bulbs since they were introduced there in the 16th century. Before that, the cultivation of the tulip probably began around the 10th century in Persia, or Iran as we know it today. The first tulip bulbs to be introduced into Europe were from the Ottoman Empire and they were sent to Vienna in the 16th century. Immediately they became hugely popular, mainly due to the intense petal colour that no other contemporary plant possessed. From Vienna, they were swiftly distributed to other parts of Europe, but primarily to Antwerp and Amsterdam. By the 1630’s, the tulip bulb had become the fourth leading export product in Holland, and it was at this point that things began to get silly – ‘Tulip Mania’ was at hand. The contract prices of tulips reached extraordinarily high levels because of speculation in tulip futures amongst people who never even saw the bulbs. Whereupon prices subsequently collapsed. The whole process is now considered to be the first recorded speculative ‘bubble’. Everyone in time did return to their senses and the tulip trade, which, from an economic perspective, may have hurt many people at that time, recovered and is now thriving once again. So not only does the tulip have a long history but it continues to evolve in the bulb fields of Keukenhof.

There is another bulb garden, much smaller than Keukenhof, and perhaps not as well-known but of no less importance. It is in a small town called Limmen, about half an hour’s drive north of Amsterdam. Here you will find a garden called Hortos Bulborum. This is where the oldest and most rare varieties of tulips are grown. Of course, HortosBulborum is not as expansive as Keukenhof, but well worth a visit nevertheless, to understand the heritage of modern tulips and look at the past 400 years in flower format.

Pieter Boschman established this modest plot of around four acres, back in the 1920’s.HortosBulborum has since become a national treasure.He was the head teacher of the Limmen Primary School and a keen gardener. In association with other keen gardeners he collected historic tulips, planting them initially in a patch of land next to the school. Boschman’s passion grew, as did his collection, and he became quite a celebrity at the time, teaching, identifying and opening a bulb museum. Now each spring you can visit and walk down memory lane to view more than 2,500 varieties of tulips, most of which are no longer in general cultivation on the large commercial tulip fields.

Why is this small plot important?

It is a sad fact that the tulip bulb trade changes very quickly,as shades of colour and different shapes come into fashion with the general public, but thengo out again, just as quickly. A bulb not only has to produce a reliable crop, it must also provide a high turnover. Commercial growers must be speedy to respond to demand. This is where Boschman’sgarden steps to the fore. It acquires samples of any tulips that are on their way out of cultivation, as well as any that are currently enjoying their heyday, but which, in a decade or so, may have fallen out of favour. Planted in this living museum, their existence is safeguarded. It is now possible to buy some of these rare tulip blooms as stocks have been increased. Growers can also buy certain bulbs to prevent them from completely vanishing.

HortosBulborum is fiercely protected by trustees and is run entirely by volunteers, many of them retired bulb growers. The passion is obvious. Everything is meticulously planted, then neatly labelled and catalogued. The tulips are rotated exactly as vegetables would be, to allow rest and recovery in specified areas of the garden. The garden is still beside Limmen’s village church but the school has long since disappeared. New homes border the garden but despite commercial pressure this garden remains sacred, and has important heritage value within the traditions of a bulb growing country.

What will you find there?

‘Duc van Tol Red and Yellow’ is a good place to start. It’s the oldest known cultivated tulip, recorded in 1595. Amongst the nineteen different categories of tulips on display you’ll also find the elegant Rembrandts, notably‘Insulinde’ with its flamed and streaked blooms. These Rembrandts were bred to look like the ‘broken’ tulips, which gave rise to ‘Tulip Mania’ mentioned above. Another group of important tulips you will find are known as Breeders, very fashionable in the 18th and 19th centuries but falling out of favour by the 20th century. These came in an array of strong colours from dusky maroon, through strong pink to ochre yellow and orange. Having become almost extinct, this group of tulips could be in for a revival, should commercial growers see a new trend approaching. Of course, there are over two thousand other rare and beautiful tulips to see and enjoy.