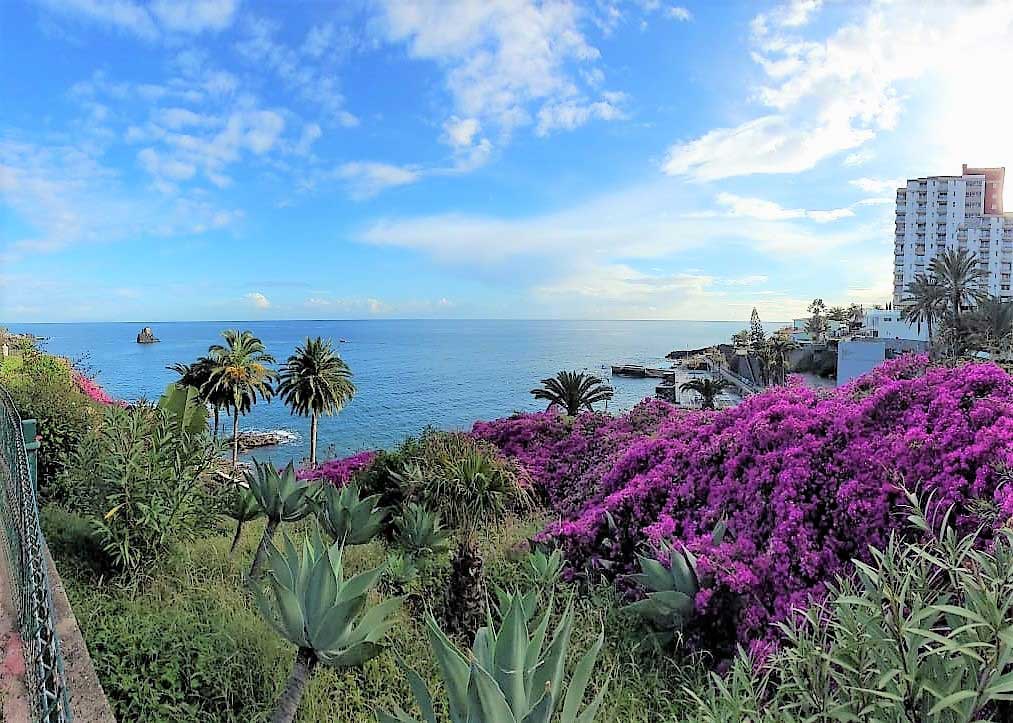 This month I want to transport you away from the wet, dark winter days of the UK all the way to Madeira, the lush, green volcanic island 400 miles off the coast of Morocco.   We all need a bit of sun on our faces and the longer, warmer days of sub-tropical Madeira seemed the perfect antidote to a Yorkshire winter.

I could have said, of course, that this visit was (ahem) research!  I’ve long wanted to visit Madeira and see its famed gardens – there are several – as well as simply enjoy strolling amongst the verdant and exotic flora that thrives on every spare inch of ground. 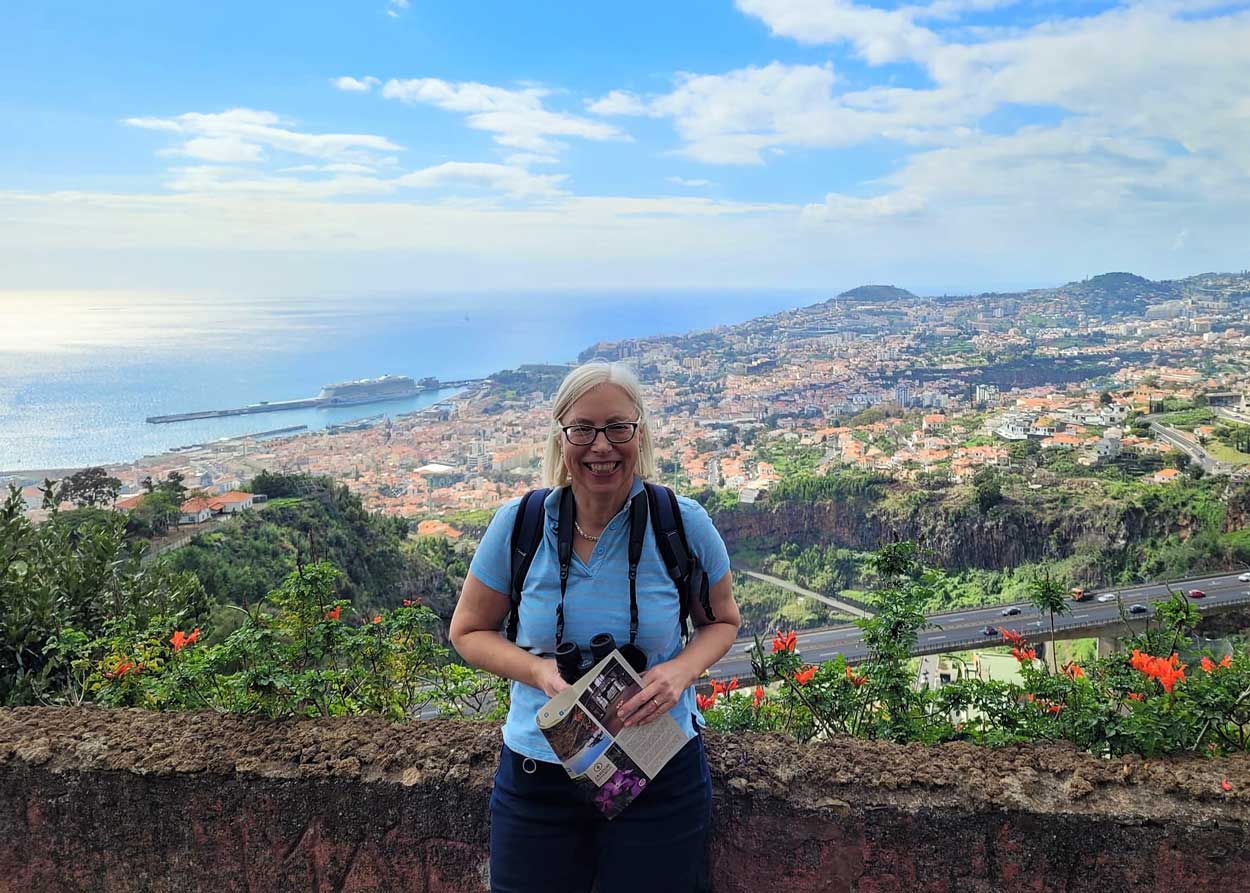 Due to its volcanic heritage, the island rises sheer from the sea – there are no beaches – and in some places continues pretty much straight up, notably at the 500 metre tall sea-cliffs of Cabo Girão, where a viewing platform with glass floor had me clutching tightly to the rail!  The mountains rise to 1,700m, tall enough to attract moisture from the Atlantic weather systems, and even in summer often have a cap of cloud.  So the island is well-watered year-round.

The volcanic soil is fertile and free-draining, and combined with a largely frost-free climate (above 1000m they do get occasional frosts) plus 11 hours of daylight even in winter, enables a huge range of plants to grow.

Seen from the sea Madeira presents tier upon tier of green, with a mix of cultivated crops and wild vegetation.  The towns and villages squeeze themselves into the fissures between the hills, so, even now that it’s a popular tourist destination, the island is carpeted in green.

From the original back room a long galley kitchen extends along the whole length of the back yard. This culminates in a dining area and all the rooms open up and connect to a central courtyard with giant glazed doors. A French drain neatly prevents water ingress over the level thresholds. A pale limestone wall diffuses light and forms a backdrop for fruit trees and plants. It radiates heat back out into the space, as do the dark paviours, that accentuate the rain and make the ground as delightfully watery and reflective as the surrounding glass walls. 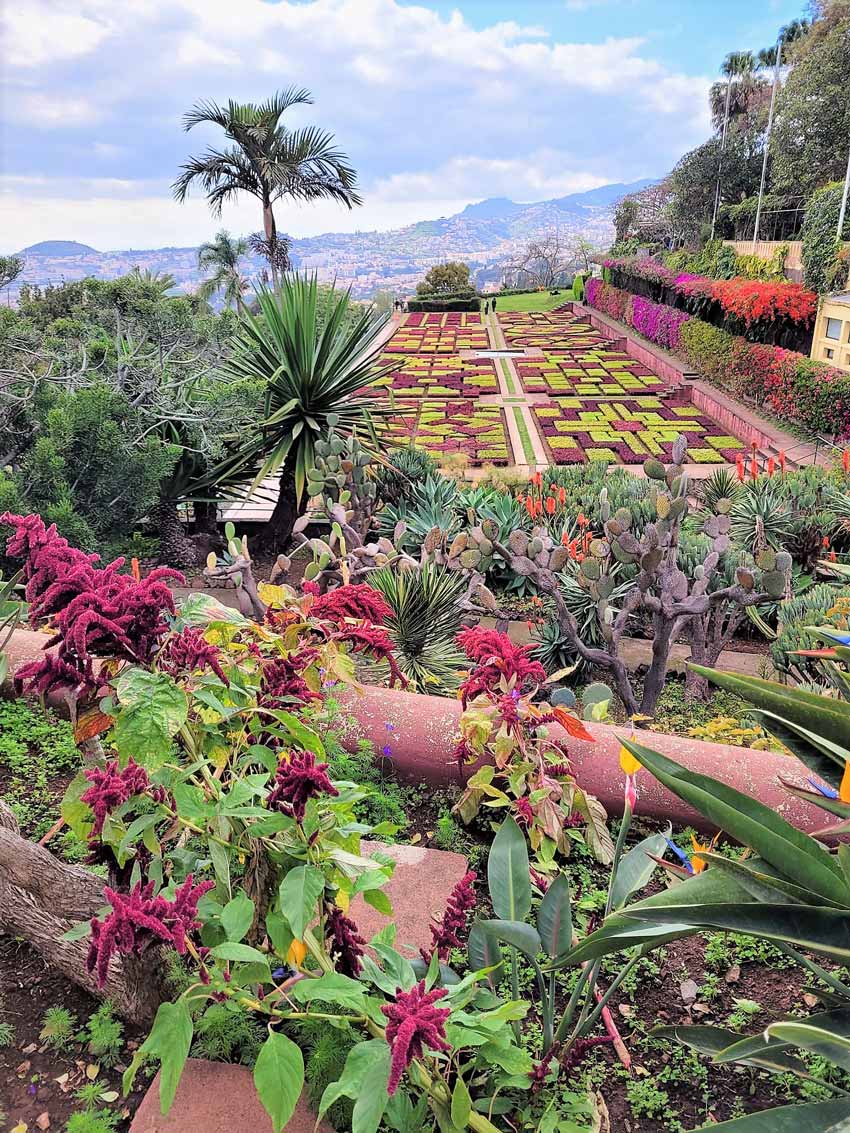 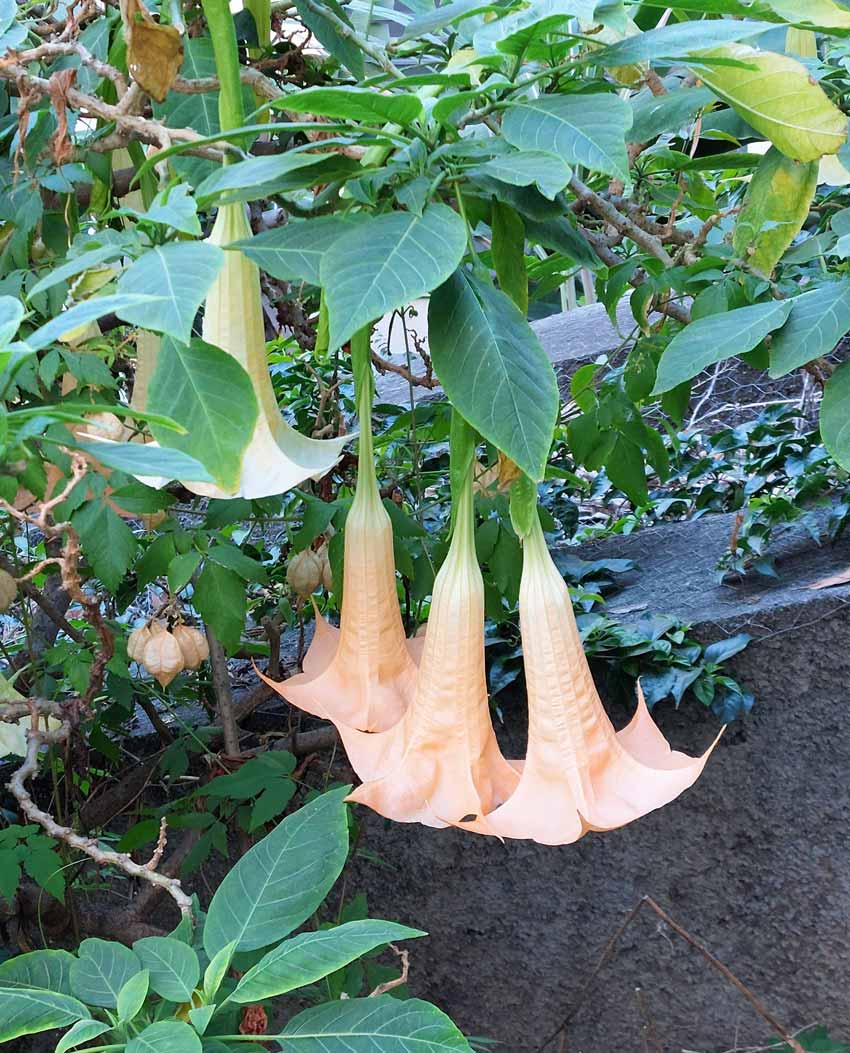 Many of the plants I recognised as tender and relatively low-growing in the UK – brugmansia for example – were growing here as large shrubs.

We can of course grow many of these lovely flowers in the UK – but certainly here in Yorkshire they would generally either be grown in a conservatory or greenhouse, or in pots that can be moved to a frost-free place in winter.  See for example https://www.rhs.org.uk/plants/brugmansia/growing-guide.   If you would like North Leeds Garden Design to help you develop a conservatory planting design do contact us. 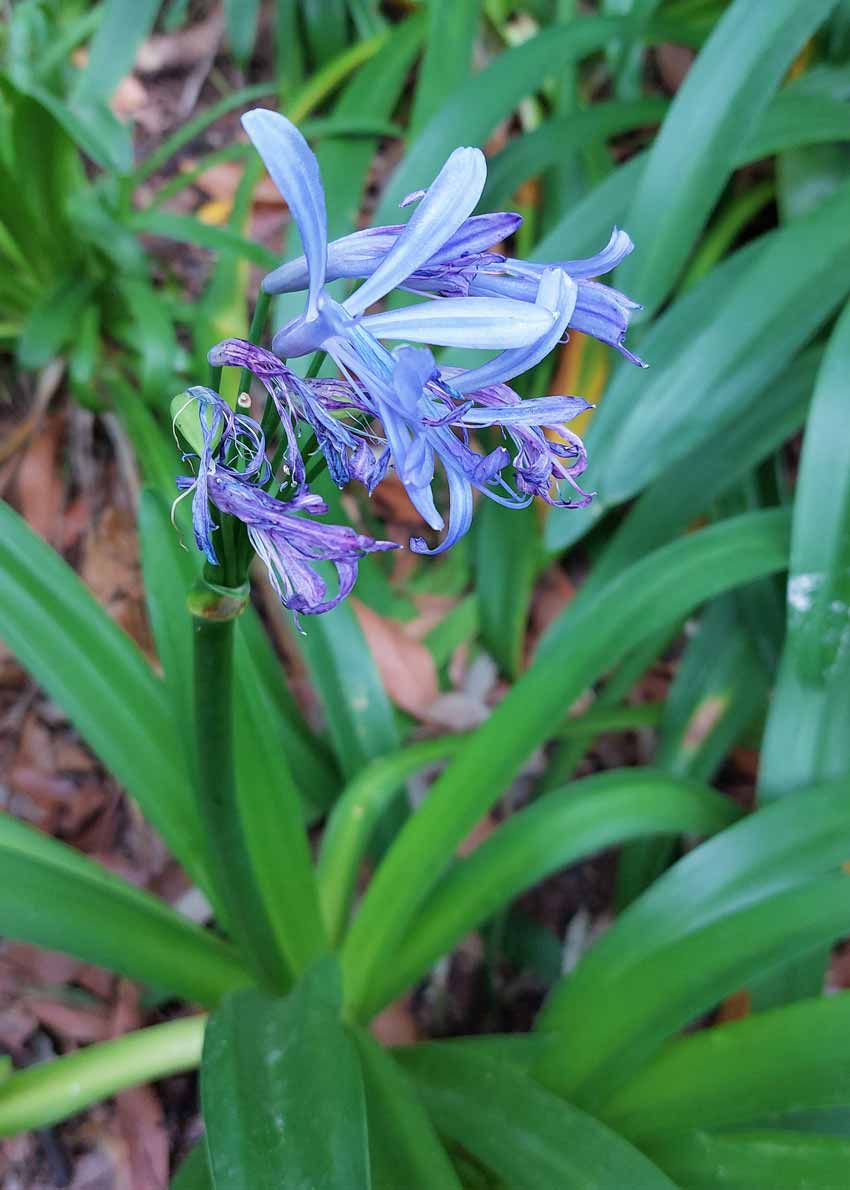 If you like agapanthus, clivias and orchids, these we saw just growing along the roadsides as well as in gardens, all in flower, especially at lower altitudes.  There were prolific draperies of bougainvillea on many house walls, and pretty hibiscus shrubs.  And the elegant Strelitzia frequently made a showy centrepiece 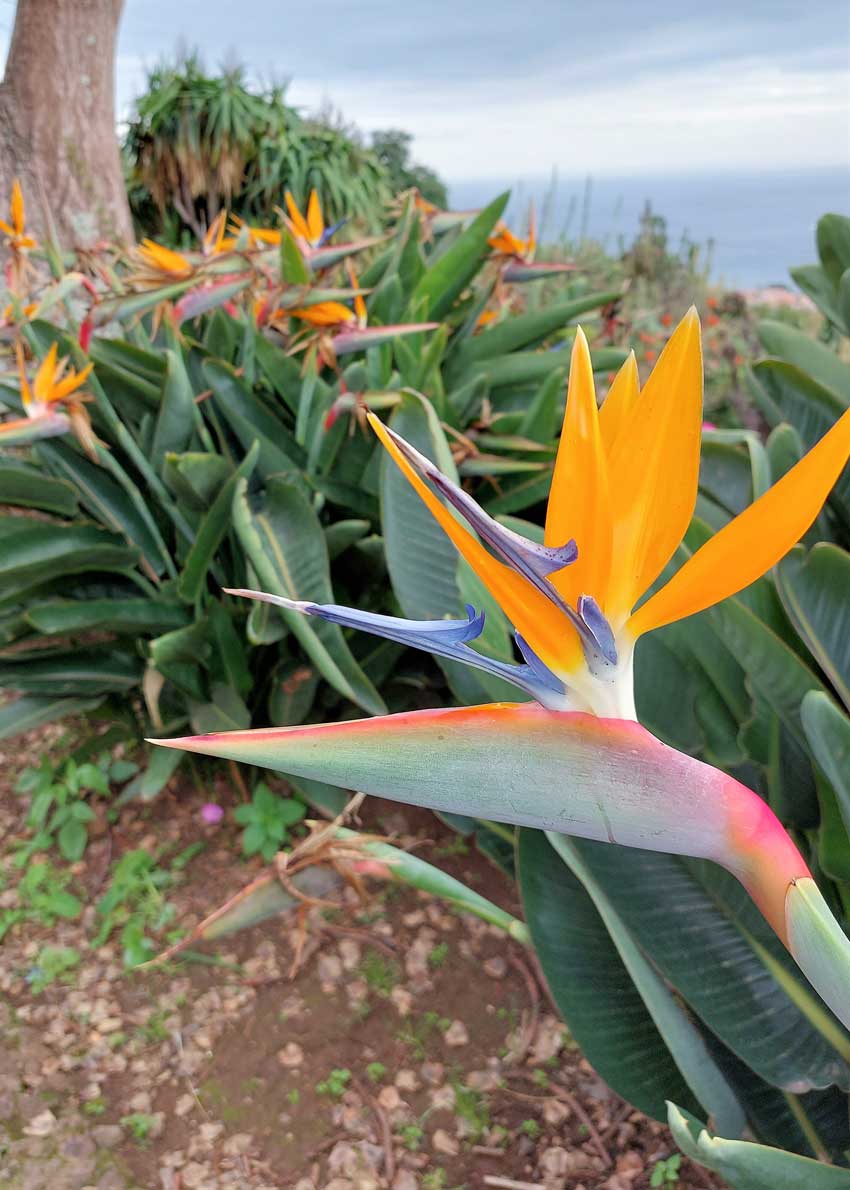 The Golden Age of Portugal 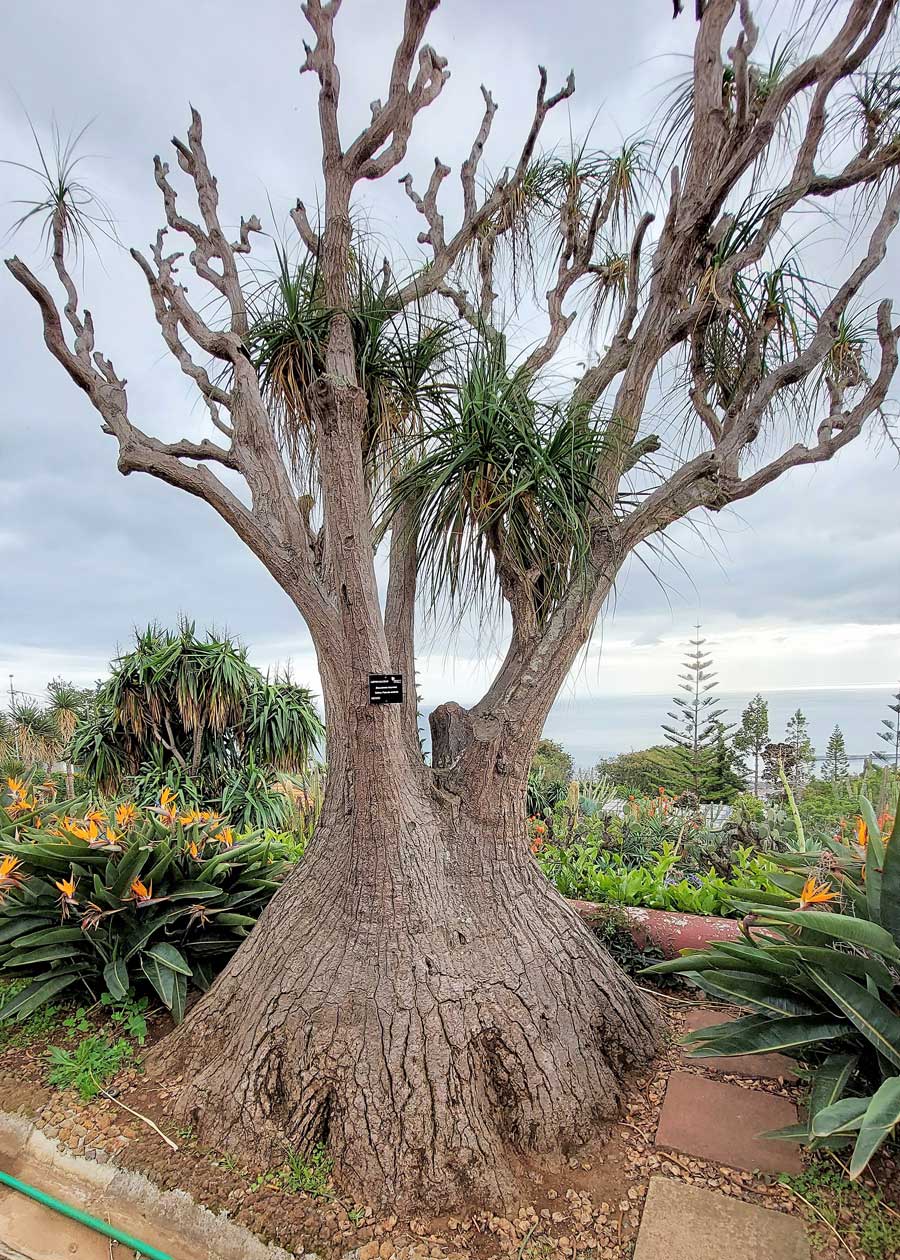 Some of the plants grown both at Jardim Botânico and at the nearby Monte Palace Gardens and the Palheiro Gardens (all well worth a visit), have been introduced from further afield.

From the fifteenth century Madeira was the jumping-off point for Portuguese exploration during its Golden Age, and the Jardim Botânico in particular includes areas focusing on cacti and succulents from dryscape zones, such as the weird and well-named ‘Pata-de-elefante’ Beaucarnea recurvata. 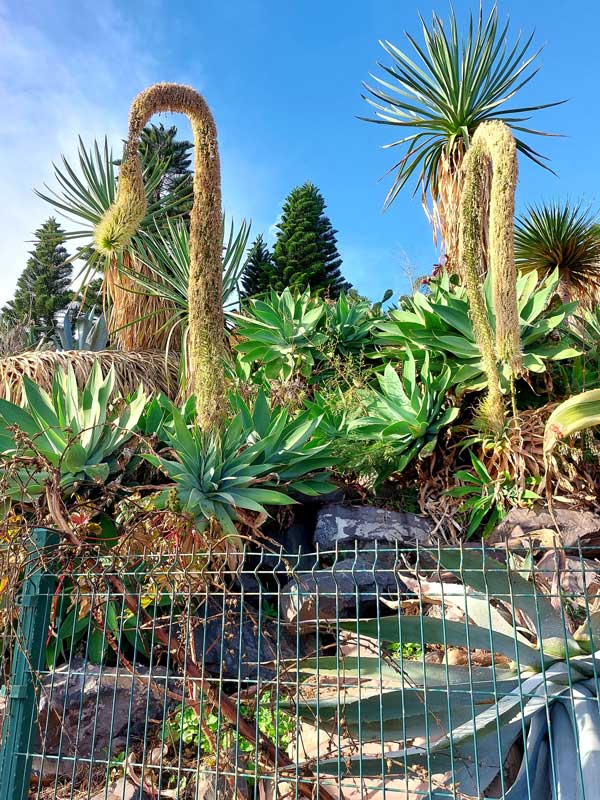 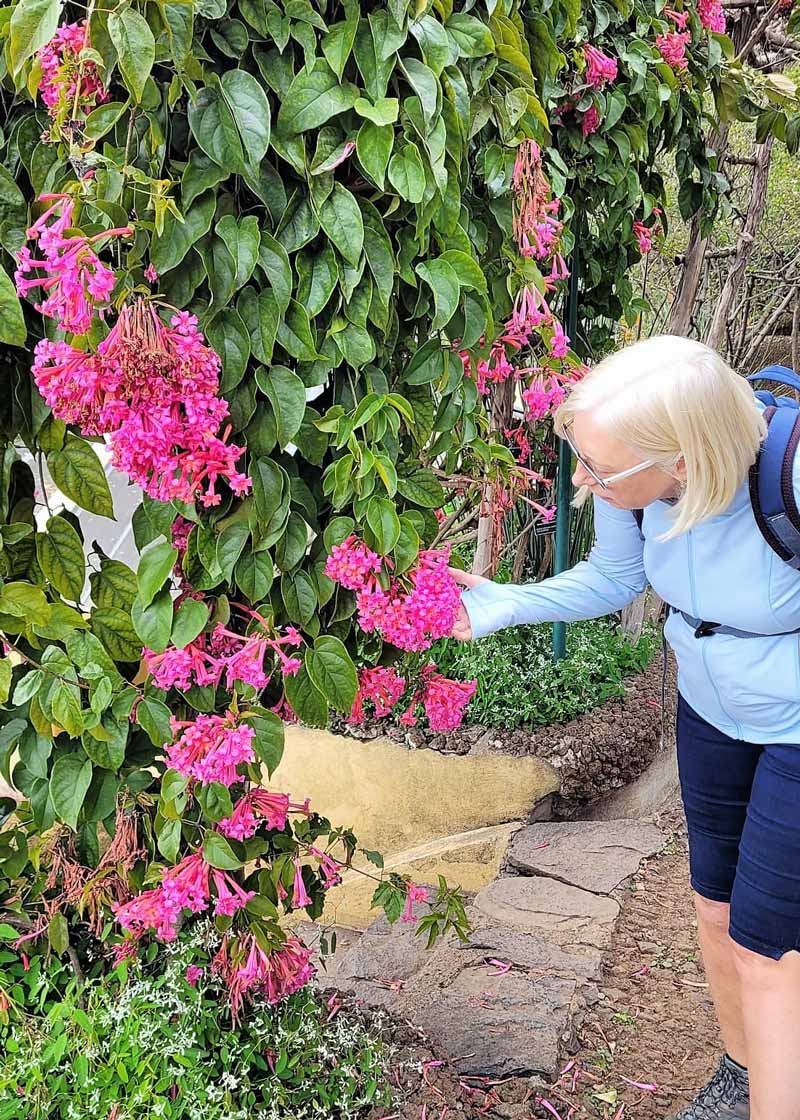 And the more well-known agave plant here has winter flowers that reminded me rather uneasily of triffids, as the flower stalks easily reach 2m tall before curving round into these sinister florets.

As well as tropical hardwood trees, shrubs and climbers – I was particularly taken by these bright carmine flowers of Lundia cordata from Brazil.

Sugar cane arrived in Madeira from southern Spain in the fifteenth century.  A few sugar cane plantations still survive, but the industry moved in the fifteenth century to Portuguese possessions in Brazil and the Caribbean, and so became the basis of the slave trade. Bananas are the latest cash crop and are delicious eating, as well as contributing to the tropical feel of the island.   The other important cash crop is of course the famous Madeira wine, fortified to make a delicious after-dinner drink, and one I much enjoyed sampling!

Finally, there were some exotic blooms we didn’t manage to track down the name of – notably this wonderful plant with apricot yellow flowers each bigger than your hand!

I hope you’ve enjoyed these photos from a warmer clime!  If you’d like to travel from your armchair to any more tempting destinations, take a look at our blog exploring arid gardening in La Palma, or our quick tour Favourite European Gardens .

Whether you are looking for a tropical paradise or a Yorkshire haven, we can help you with the garden of your dreams.  You can find lots of pictures and inspiration at our website www.northleedsgardendesign.co.uk and at our pages on Houzz – where you can also see our independent reviews. 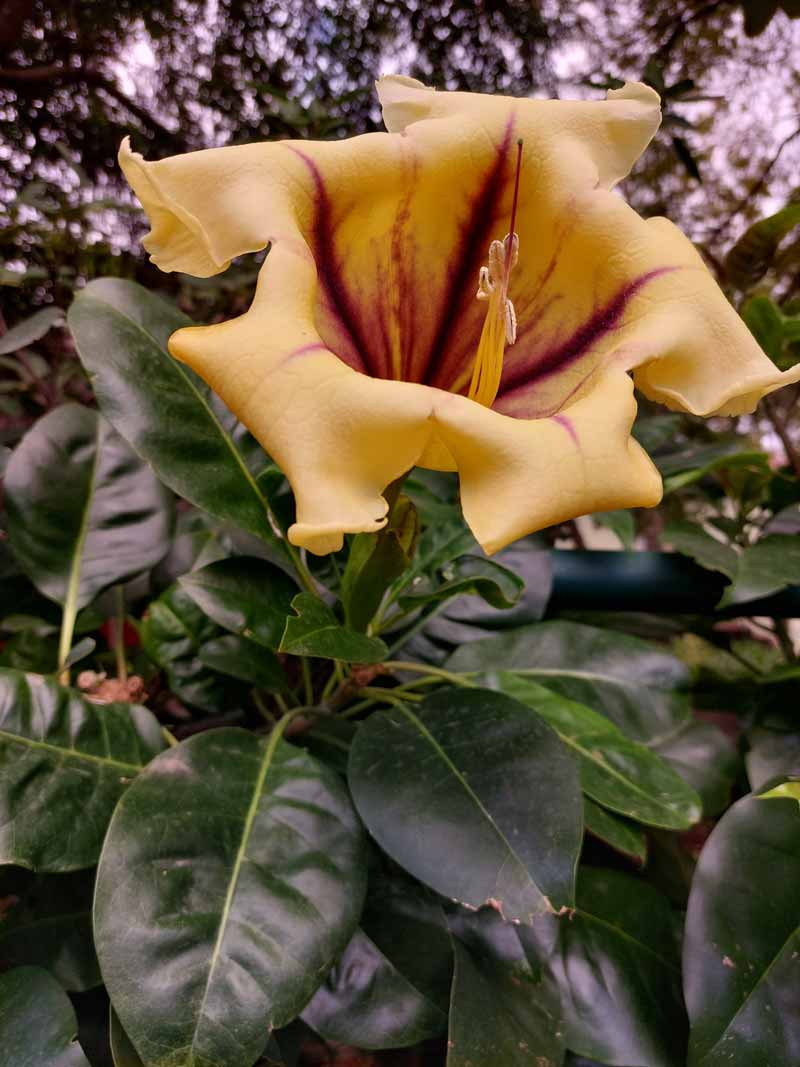