This month’s blog has been written by Kevin Lycett, a friend of ours who is interested in garden design.  He has gone out as our roving reporter.  We hope you enjoy it and feel inspired.

A first time visitor to the Todoque region of La Palma might be forgiven to think it the last place to think of starting a garden. There is no soil as such, the ground is covered with dark grey sharp lumps of volcanic rock. Many houses are built from these and it can be hard to discern where a pile of rocks ends and a house begins. Sometimes the only sign that a patch of rubble strewn ground is actually a field is a stone boundary wall, built of the very stones that the field itself consists of. 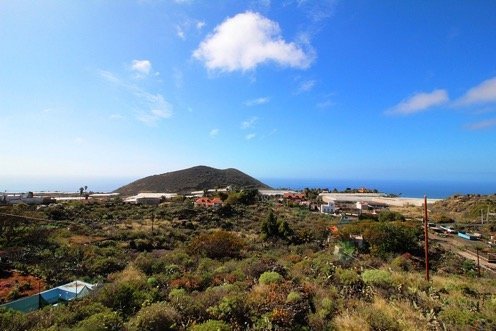 The volcanic rubble that is strewn everywhere is the weathered remains of massive lava flows from historical eruptions. The closest Todoque gets to soil is a kind of gravel made from small fragments of lava, you do not want to walk on this barefoot. Despite this, and despite the perennial issue of water shortages, the land is in fact abundantly fertile. It just goes about it in its own, slightly forbidding, way. 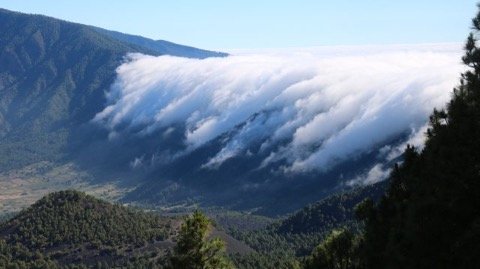 A cloud waterfall pours over the central volcanic ridge, condensation from which is the principle source of water for Todoque

With such an unpromising landscape it’s particularly interesting to see what can be done by a determined gardener. There are two principal ways people approach gardening in this region. First there is total dominance; the garden is the creation of a strong over-riding will and sustained as long as this will and resources continue to be applied. This method usually includes complete re-landscaping, with lawns and the massive use of water. It can produce spectacular results but needs constant attention and if the will and resources depart the inevitable consequence is collapse and decay.

The second method is gentler and seeks to work with the land and climate. We’re going to look at such a garden today.

When the owner of Casa Lagarto first bought the property around 15 years ago there was no garden at all. The land was a sloping plot covered in scrub, shrubs, cactus and lots and lots and lots of laval stones of all sizes.

The first decision would turn out to be very much the guiding ethos of this highly personal garden; the stones would not be cleared but the gardeners would work with them, moving them into piles and forming features – the garden would develop and evolve around them.

This led to some of the garden’s most defining structural features; a large semi-circular ‘wall’ of lava that shapes and shelters one of the major areas of the garden; the extensive use of small beds formed by rings of stones interspersed with cairn like piles of stones; and most charming of all – the endless network of paths.

This is a garden of winding paths, it is impossible to ever be sure how many there are and, even after visiting this garden every year for 14 years, being perfectly sure where each path leads. With vision often restricted to a couple of metres by shrubs, twists in the path and cairns of stones, every turn brings a new surprise, a stone bench, a bright blue wooden seat, a sentinel cactus, a hidden orchard.

The paths wind through and link several major areas of the garden, each dedicated to a particular time of day, or type of use.

Creating garden zones for the time of day or for activities

The terrace, leads from the veranda to the edge of the property where the ground falls away steeply leaving a clear view of the sea and the sunset. This is framed by the pillars of the veranda, wreathed in jasmine and bougainvillea, and the view is delicately given rhythm by the silhouettes of palms and giant agaves, with the perimeter marked by a raised edge of lava stones planted with aloe vera. Small circular beds dot the ground filled with canarian lavender, pelargoniums and bejeque ( a succulent-like a long stemmed rock rose). This is where sundowners are contemplatively sipped and on warm nights dinner is taken. 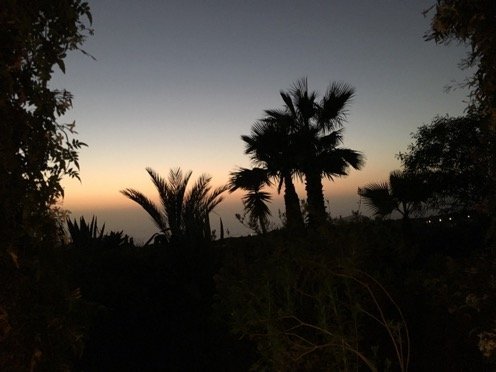 The silhouettes of palms on the edge of the terrace frame the setting sun as it sinks over the Atlantic ocean. 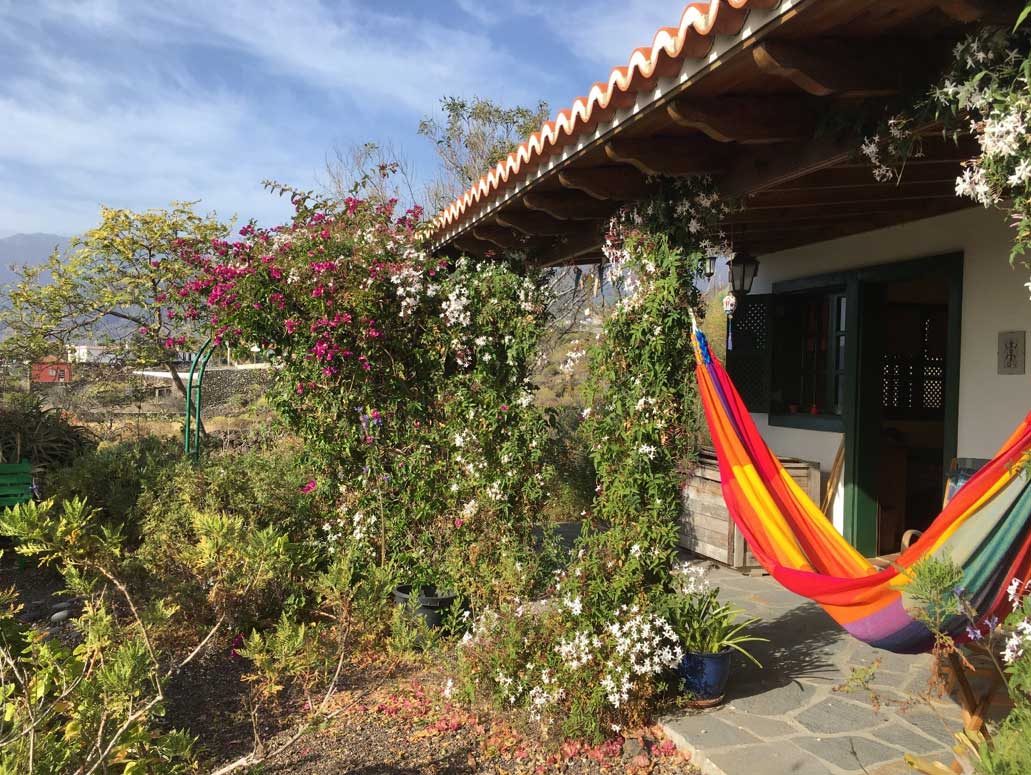 On the veranda the air is thick with the scent of jasmine that wraps the columns, while cerise bougainvillea blossom frames the sky. Afternoons are whiled peacefully away in the hammock, sipping tea and half-doing crosswords.

The breakfast garden is on the south of the property and is dedicated to breakfast time, when the morning sun is not yet too fierce to sit out in. Backed by its imposing curved wall of lava it provides shelter from the wind. The bright blue bench is where many day’s plans are hatched, whilst watching the myriad lizards that give the house its name dart among the rocks. The garden is level and semi circular with paths winding through circular beds that feature salvia, pelargoniums, day lilies, frangipani, oleander, canarian lavender, and some spectacular specimen agave Americana ‘variegata’. 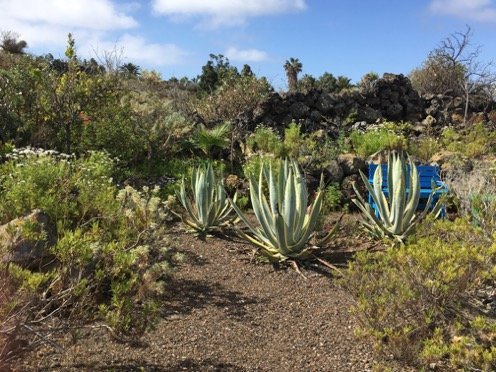 Sheltered by a high semi-circular wall of loose stones the breakfast garden is an early morning sun trap. 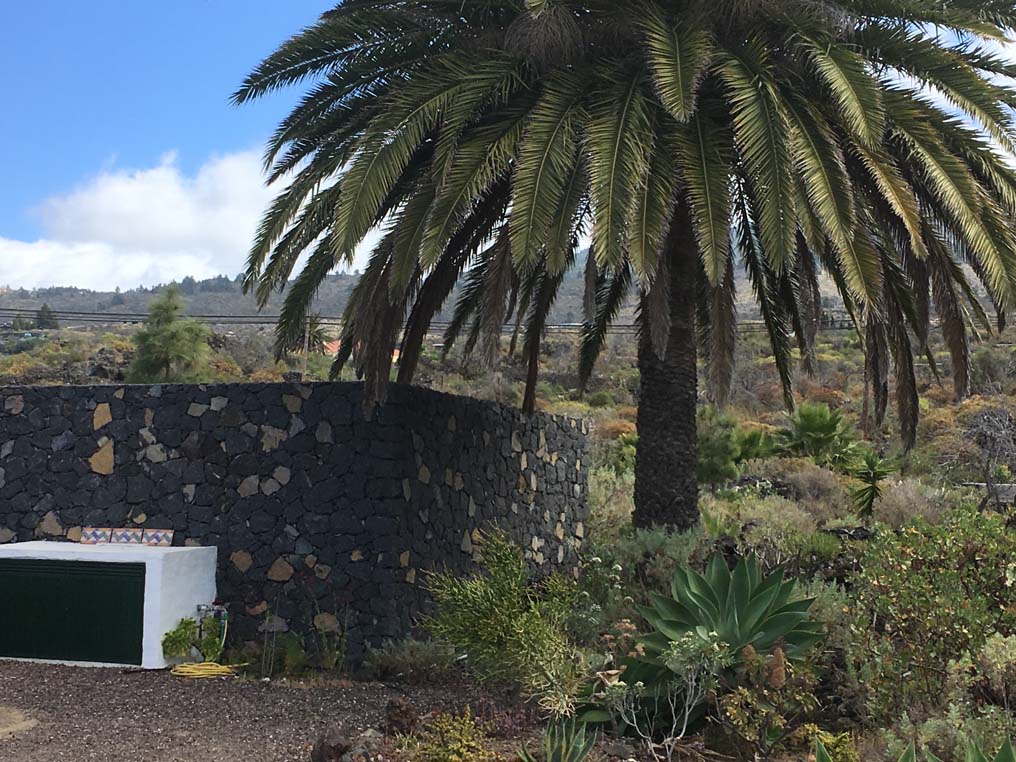 Everywhere paths meander, often ending at brightly coloured benches. The silver green shrub in the middle fills the air with its heady scent. Nobody can ever remember its name but everyone knows it’s used in the preparation of a powerful local aromatic liquor, the name of which is never agreed upon. 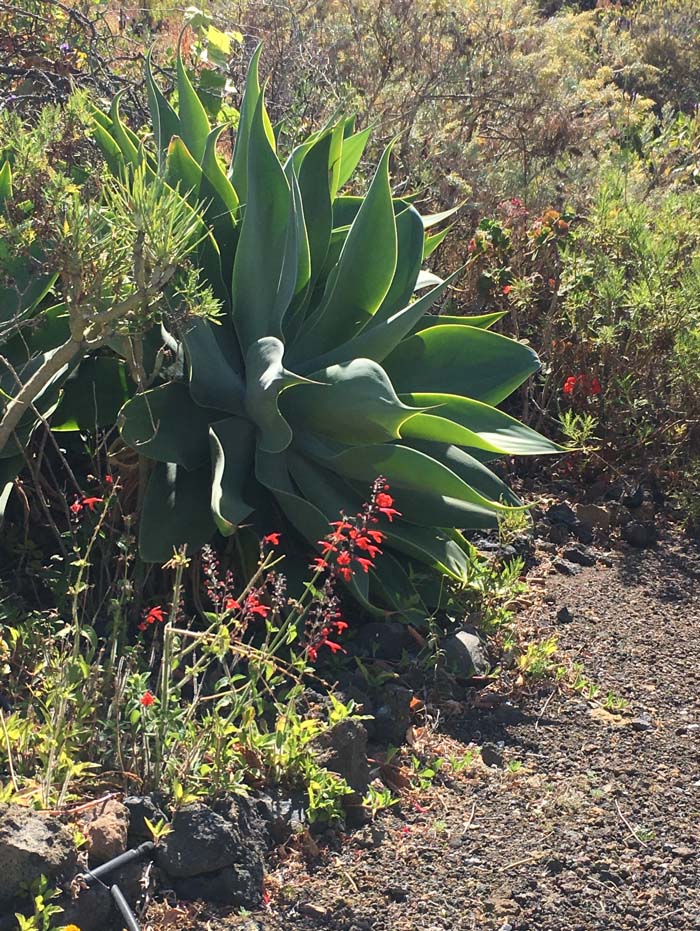 Salvia gleams like rubies against the dynamic architectural form of agave attenuate, scooping out deep shadows from the sun filled air.

The orchard. This is the final major area, it’s the far side of the lava wall from the breakfast garden and is in a tiny west facing sloping valley. This was once a small vineyard but the days of the local people cultivating small plots of grapes are sadly almost over, however native Palmeran wine is still produced by a few farms and can be very good indeed. Only measuring about 10 metres by 25 metres this miniature orchard provides a stunning variety of fruit including grapefruit, avocado, almond, nispero (loquat), papaya, mango, orange, lemon, mango, custard-apple, banana, olive, pineapple, guava and madreno (delicious grape size mandarins). 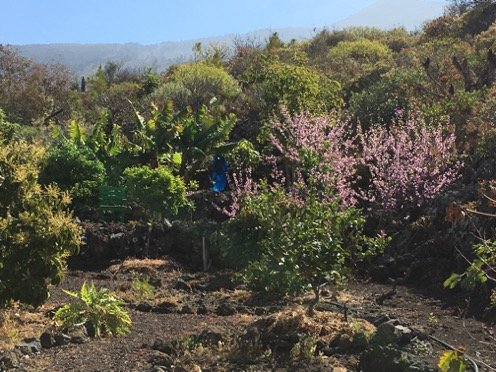 Behind the orchard, in the far distance, towers the central volcanic ridge the Cumbra Nieva. In the orchard’s shelter are over 15 types of fruit tree. In this photo you can see bananas, grapefruit, almond and lemon.

In between, around, dividing, and marking these three main gardens are the piles of lava, and the natural slopes of the land. Winding through all these are the ever present paths, and dotted everywhere are wooden and stone benches offering a different view of the garden, or hidden places to read a book or simply sit and soak in this highly individual and endlessly fascinating garden. 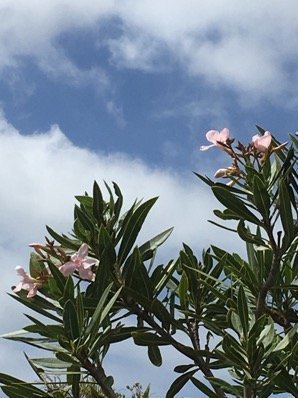 Atop the curved lava wall of the breakfast garden oleander nods its pink flowers.