Snowdrops are the showstoppers of late winter.  As their elegant green spikes push up through the frost and snow, you can sense life returning where all has seemed barren.   Many of us grow a few in our own gardens, where they look lovely grown scattered around the bole of a tree, naturalising in the grass, or just in a border or tub.

Gardens around the country also open specially from February so that people can enjoy the experience of walking amongst drifts of snowdrops, like a light snowfall on the grass.  The lovely display is over within the month – but, if you live north of Birmingham, the good news is you’re still in time to enjoy a snowdrop walk! 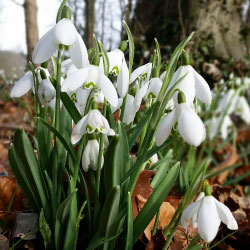 Snowdrops are worth a detailed look.  They are beautifully delicate, forming small clumps only 10-15cm high, yet tall enough to catch the breeze and nod their veiled faces gently to those who take the time to stop and look.

The warmth of the February sun enables their long white outer skirts to lift and open, revealing a central flower with tiny green embroidery around its lower edges.   Many snowdrops also give off a beautiful perfume once they are fully open and the sun has warmed them.

Last week was school half term holidays for many of us.  I took the opportunity to visit Walsingham Abbey in Norfolk, which has a renowned snowdrop walk.

The Abbey itself has been in ruins since the dissolution of the monasteries in the 1530s.  It now makes a glorious centrepiece for the gardens, which were largely created in the early 19th century as an informal garden of lawns each side of the River Stiffkey, surrounded by woodland.

Presumably unsure whether the gardens already had sufficient atmosphere(!), in the late Georgian period the county family whose property this was also added a number of Gothic-style features such as the  ‘Knight’s Gate’ and the ‘Packhorse Bridge’.

Today, all these features in turn mark out a long meandering walk which takes you through the 14th century gatehouse, past the ruined abbey, across the river and through a woodland walk around the Dell garden, then back in a sweeping arc by the medieval church of St. Peter. 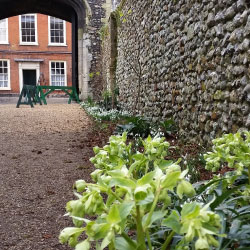 As you walk the snowdrops ebb and flow around your feet, making a wonderful carpet of white and green, interspersed by crisp brown beech leaves and velvety emerald green mosses.

Leafless branches above show grey against a jay-blue sky, making pale twiggy shadows on the ground.
While most of the snowdrops are the commonly-found single flowers, there are also some patches of ‘double’ snowdrops, so-called because they have an extra frill of flower petals.

And in some sunnier parts of the garden we also came across gorgeously gold patches of winter aconites, just beginning to wink their golden eyes at the sun.

At Walsingham Abbey we also looked at their collection of more unusual snowdrops, known formally as galanthus.  We were particularly pleased to make the acquaintance of ‘Mighty Atom’, a very substantial galanthus with a large, globe-shaped flower, and the delightfully-named ‘Pusey Green Tips’. 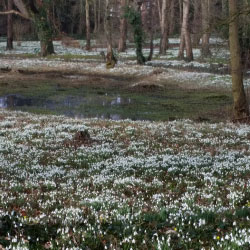 There are growers in the UK offering these and other snowdrop cultivars, all bred specially to show different characteristics such as size of plant, complexity of flower, and different decorative effects with green and even yellow colouration.

Some people get really hooked on collecting the different cultivars, with a single bulb of the rarer snowdrops changing hands for up to £50!   To see more of the wonderful variety of galanthus, take a look at the beautiful snowdrops shown at Chelsea award-winning www.AvonBulbs.co.uk

I am happy to grow the ordinary snowdrops and have some groups slowly growing amongst spotted-leaved pulmonaria, purple heucheras and hellebores in the woodland part of my own garden.

But a few years ago a neighbour kindly gave me a clump of the cultivar ‘S. Arnott’.

This is a larger, more imposing, snowdrop with a larger flower and bigger leaves.  It really stands out in the border. 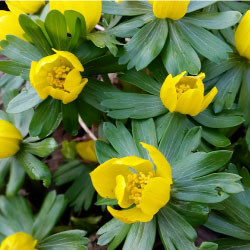 If you’d like to grow snowdrops in your own garden, the best time to plant them is immediately after flowering has finished.  This is known as ’in the green’ because you buy the entire plant, not just the bulb.

Galanthus ‘in the green’ are freely advertised in March both online and through nurseries.

When you receive your snowdrops, trials have shown that it is better to transplant the whole clump in one because of the extreme brittleness of the tiny roots.   If it is a large clump, leave it til the following year to split it.

It is possible to buy the plants as dry bulbs from late spring but for some reason they are rarely successful. 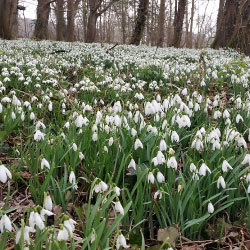 If you’re lucky there will still be gardens open in your area with snowdrops to enjoy.  It’s easy to find them – just type in ‘Snowdrop gardens’ in your web browser.

In Yorkshire there are a number of wonderful snowdrop gardens including at Hodsock Priory, Burton Agnes Hall and Brodsworth Hall & Gardens.

Other top spots for seeing snowdrops around the country include Belsay Hall in Northumberland, Audley End House & Gardens in Essex, Witley Court & Gardens in Worcestershire, and Eltham Palace in London.