In praise of the daffodil

Some people call them daffodils, others call them narcissi.  Either way, they are one of the easiest and lowest maintenance bulbs to plant in the garden and I love them.  Now is the time to plant them for a display to lift the spirits in spring.

“an afternoon yellow and open-mouthed with daffodils”

Daffodils are rather unfashionable at the moment.  Some people think they are brash, even vulgar – shouting out too much in a muted spring garden.  Yellow is the one colour that clients regularly tell me they don’t like……and of course daffodils are always yellow, aren’t they?  Well actually no.  There are plenty of daffodils in beautiful blooms of cream or white and even peach and green.  But I like yellow in spring: when it’s a grey, rainy day (and don’t we get those!) yellow stands out, cheering your heart when you trudge home from work or the supermarket.

Daffodils have been around for a very long time.  The Greeks knew them as narcissus – and this is still their official name today.  The story goes that Narcissus was the son of the river god Cephissus and the nymph Liriope.  Incredibly handsome, he fell in love with his own reflection in the waters of a spring and pined away; the flower named for him sprang up where he died.

We know that the Romans planted narcissus in their gardens, and probably brought them to Britain; they are certainly known all over western Europe, especially Spain.  The little daffodil narcissus pseudonarcissus was once commonly found growing wild across much of Britain, not just in Wales where it has been adopted as the national flower because it flowers by St David’s day on 1st March.  Several varieties of daffodils were known in England in Shakespeare’s day; he called them the flower that “comes before the swallow dares”.  From the late 19th century farmers on Scilly have been growing daffodils to be delivered by post all round the UK as early as January.

There are now hundreds of daffodil cultivars to choose from.  The perianths (petals) are mostly yellow or white, but can occasionally be orange, green, or red or a combination of these colours.  Today, many cultivars have brightly coloured coronas (cups) which may be yellow, white, pink, orange, red, green or a combination of these.  Some types are multi-headed, some scented, and they range in height from tiny 15cm beauties to statuesque 60-70cm stalwarts.

Daffodils are one of the most reliable spring-flowering bulbs, blooming year after year with little attention.  They grow well in containers, borders and grass, to brighten up your garden throughout spring.

Plant narcissi in late September or early October for the best result next spring; but don’t worry if you forget about them as I did one year – planted in November they still flowered next spring, just a bit later.

Before planting daffodils, dig over and weed the soil, adding a small amount of granular fertiliser.  If a in a pot, use fresh, peat-free compost mixed with some soil or grit.

They should be planted twice the depth of the bulb below ground, with enough space between each bulb for them to grow well.  This handy RHS video shows you exactly how to do it: https://www.rhs.org.uk/videos/advice/Planting-bulbs-in-borders

They need a sunny spot, and well-drained soil, although a few varieties can cope with light shade; the RHS suggest ‘Actaea’, ‘Jenny’ and ‘Jack Snipe.

My current favourites include the wonderfully named ‘Rejnvelds Early Sensation’ which really does flower in January.  And ‘Sir Winston Churchill’, a late daffodil with double cream flowers and the most gorgeous scent.  It’s only affinity with the famous prime minister that I can think of is that the stems are tough enough to cope with spring gales! 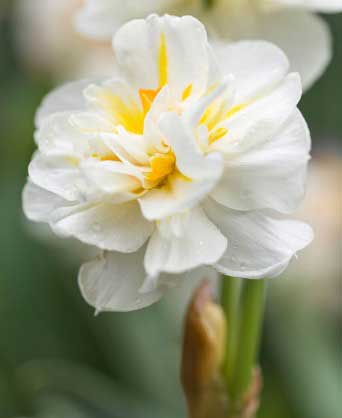 Amongst the smaller daffodils I would pick out the very pretty ‘Tete a tete’ and the early flowering ‘February Gold’.  These look particularly good at the front of a border in groups and also grown in pots amongst other spring flowering bulbs such as snowdrops and tulips for a succession of colour.  Add a hellebore, a miniature ivy or even a small grass and you have a pot for your front path which flowers from January to May. 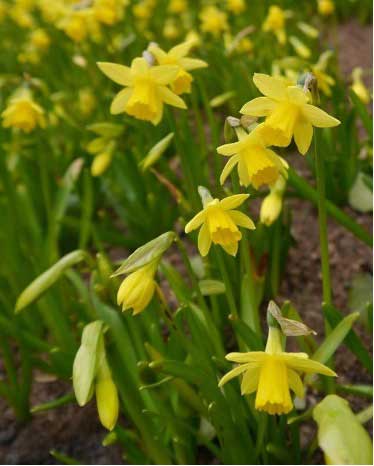 If tulips appeal  for your garden gain inspiration from our my visit to Keukenhof a couple of years ago.

Get in touch with North Leeds Garden Design if you’d like to start thinking about your spring garden and the transforming presence of daffodils!