I feel the earth move under my feet

Recently we ran a blog about the secret life of trees, exploring how they communicate with each other through a web of roots and fungus in the soil. Until recently this interconnected world beneath the soil was almost completely unknown and it sparked a curiosity in us – just what else is going on under our feet, in the darkness of the soil secret, powerful unknown? In fact the more we thought the more we realised how little is generally known about this thin layer of matter without which the world would be a very different place, a world in which we almost certainly would not exist. What is this thing we call soil?

Let’s get the bare facts sorted; turns out that soil is a pretty complicated thing. It’s made of a mix of air, moisture, minerals and organic matter. About 50% is air and water, and the other half contains about 45% mineral matter (clay, sand and silt particles) with the other 5% made up of organic matter, which is decomposed plant and animal material.

That, however is not the whole story, soil is teeming with life; insects, bacteria, fungi and other organisms. Just one teaspoon of soil can contain between 100 million and 1 billion bacteria. That’s as much mass as two cows per acre.

Why do plants need soil?

As gardeners, apart from the sheer marvel of soil, we’re naturally interested in what soil means for plants. The first thought is of course food, after all that’s what we do most, we ‘feed’ the soil with fertiliser and compost and thus indirectly feed our plants. But it’s not quite like that. It only takes a moments reflection to recall that plants feed themselves through photosynthesis – sunshine, water and carbon dioxide – no soil needed there. There are also plants that need no soil at all such as the epiphytes, or plants that can get by with little or no soil like hyacinths or orchids. So what is the role soil plays for plants?

The air in the soil allows the roots access to oxygen, which is essential for adequate growth. Soil also maintains satisfactory temperatures for plants by absorbing heat from the sun and losing it to the atmosphere. Organic matter in the soil supplies the roots with carbon, while water in the soil is taken up by the roots. A large tree can lift 100 gallons of water from the soil every day. In spring this rate can be many times higher, I remember naively lopping a branch of a Himalayan birch in early spring and watching with astonishment as the water ran out of the stump like a fast dripping tap. An often overlooked aspect of soil is that it provides the anchorage plants use to hold fast, to withstand high winds and the weight of snow. And now we come to the nutrients, and soil is indeed an essential source of nutrients for plants. Of the 16 nutrients considered essential for plant growth 13 are provided by the soil. Lastly, the very thing that started off this enquiry, fungi. The body of the fungi exist entirely in the soil, the mushrooms and toadstools we see above the soil being only the fruiting part. It consists of a vast mass of very fine threads called mycelium.

More than 8 miles of these threads can be found in one cubic inch of soil. Mycelium are hugely important for plants. They break down organic matter into forms that plants can absorb. They hold water increasing the amount that soil can hold, and by binding together water and soil particles increase the soils resistance to erosion, and they of course form the newly discovered and still not fully understood ‘neurological network’ for trees and many other plants enabling then to communicate with each and even feed each other.

Mess with soil at our peril

Many of the ways in which soil benefits plants also directly or indirectly benefits us as all. A stark illustration of that is the fate of the great prairies of the mid-west of the USA. When first encountered by European settlers the prairies had existed for millennia, and what seemed to European eyes as mere wasteland was a highly complex, interrelated environment. The prairie grasses were rooted in soil of extraordinary depth and their root systems responded to this by forming systems up to 15 -20 feet in depth.

These roots bound the soil together, and acted as a huge reservoir for water. Together the soil and the grasses withstood the harsh weather conditions of the vast expanses of the mid-west plains. Well we all know what happened next, the prairies were grubbed up and much shallower rooting crops planted. Within a few decades the wind, storms and freezing winters had worked together to strip the soil away completely, leaving famine and death as the sole occupants of these once hugely fertile and stable lands. 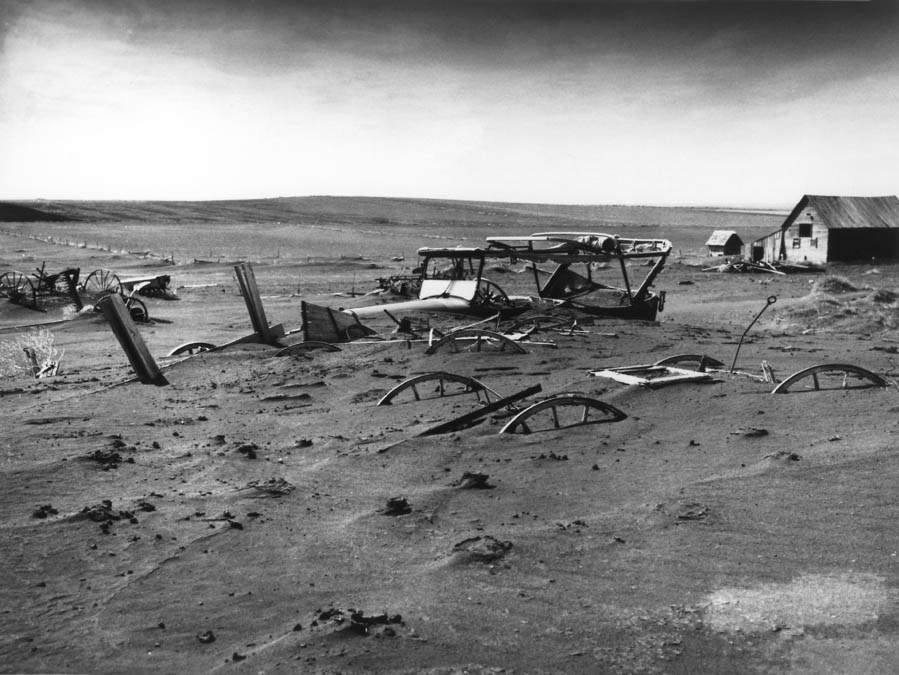 Learning the lessons of soil

Terrible tragedies like the dustbowl illustrate so clearly how little we understand about the complex and finely balanced systems of the natural world. Insights like this have also helped inform the permaculture movement and no-dig gardening. We are realising that the soil is a complex and marvellous system that demands respect and care. One that should be interfered with as little as possible. Today farmers in the Midwest are starting to replant prairie along with their agricultural crops and within a couple of years are starting to see huge benefits in massively reduced requirements for fertiliser and insecticides, and reduced soil erosion.

We are finally learning that the soil is wiser than us, and it’s better to listen to it and to work alongside it as a friend, rather than overpowering it and subsuming it to our will.