Happy Halloween in the Garden 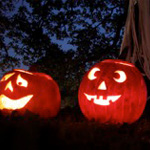 It is widely believed that many Halloween traditions originated from ancient Celtic harvest festivals, particularly the ancient Gaelic festival of Samhain; that such festivals may have had pagan roots and that Samhain itself was Christianised as Halloween by the early Church.

The current traditions and importance of Halloween vary greatly amongst the countries that now observe it. In the UK traditional Halloween customs include children dressing up in costume going trick or treating, holding parties, pumpkins are a bit hit, whether put in your window or in the garden  lit up with a candle. In Brittany, children play practical jokes by setting candles inside skulls in graveyards to frighten visitors. Mass transatlantic immigration in the 19th century popularised Halloween in North America and celebrations there have, to some extent, reinvigorated celebrations back in Europe. This is due largely to one major innovation that they have incorporated – the humble pumpkin. Have you ever tried to hollow out a turnip? Without access to a pneumatic drill it is no easy task!

You just know Halloween is close when pumpkins begin to appear, and having purchased your pumpkins, one thing is for certain: at some stage you’re going to have to hollow them out. So let’s begin with just a few quick tips. Firstly, start from the top, cut a large circle, making sure that the opening is big enough to reach easily inside, put this aside as later it will be the lid. Next comes tidying it up inside, a large ice cream scoop is the ideal tool to remove the guts – and don’t be averse to getting your hands in there. It’s messy and slimy, just as Halloween should be. Use a spoon to scoop away the remains and thin out the sides and then you’re ready to begin your artistic endeavours. If carving designs is not your thing, why not just hollow out your pumpkins and use them as planters – simply fill them with an assortment of  beautiful autumn flowers.

What about combining your carved pumpkins together with some that are still intact and creating a display patch that no child will dare to approach, let alone enter? Suspend cobwebs (see below) from nearby trees, incorporate oversize spiders and add a variety of small scary creatures – rabid mice, bats and red-eyed rabbits. 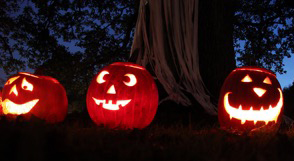 Your garden is no longer just a garden but a ghoulish graveyard wherin rest the dead. Buy (yes, it is possible!) or make tombstones to place around the garden. Dismantle a plastic skeleton and scatter the bones around the garden –  throw some soil over them for added effect. You can illuminate the whole scene with LED lights sitting in the eye sockets of plastic skulls.

You’re not afraid of spiders are you? Of course you’re not. Create an oversized web attached to tree branches with furry tarantulas climbing through it. Wire and fabric can be used to create the spiders. And what about this twist on using spiders? Using a picture frame no longer needed and any paper or fabric for the background, spray-paint them black, then, using a variety of different-sized plastic spiders, stick them on the fabric and hang the surrounding frame from some tree branches – illuminate for a scarier look. Last suggestion with spiders – what about sourcing small magnetic spiders and placing lots of them on the outside door to the garden.

The Wicked Witch of the West

I absolutely love this one and it’s so easy to do! Get a pair of striped tights, stuff them with paper so that they can be placed upside down in a garden bush, sticking upwards. Find a pair of red shoes, stick some red glitter on them (that’s assuming you’re done with the shoes!) and secure them onto the feet. Hilarious! If you don’t have any red shoes then a visit to your local charity shop will be required. 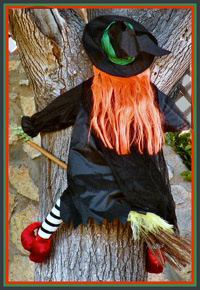 For the Adults Only

What about this gory spin on a drink? Fill syringes with grenadine (blood-red) and serve in small mason jars with some vodka or gin? Presented on your outside garden table surrounded by little pumpkin lights, these would look and taste brilliant!

A treasure hunt can be adapted for children or adults. It takes a little preparation but is great fun. The clues can be placed in witches’ hats, in special pumpkins or on a skeleton in amongst leaves. Remember to give your hunters their first clue to start them off and the all-important last clue that leads to the treats. You’ll usually find that the adults are more competitive than the children!  If you need some help, just look up this Halloween clue hunt for a few details.

However frightful you wish your fun Halloween garden to be contact North Leeds Garden Design today.