Get Inspired by England’s Best Gardens

‘How many kinds of sweet flowers grow in an English Country Garden?’ – this opening line to a song, a hit by Jimmie Rodgers many years ago, is embedded in the consciousness of the British public. The first verse of the song mentions daffodils, hearts-ease and flocks, meadow sweet and lilies, stocks, gentle lupins and tall hollyhocks.

What better way to be inspired than to take a closer look at some of England’s most iconic gardens, created with passion and vision by architects, horticulturalists and traditionalists for the benefit of all? With so many beautiful gardens to choose from we are spoilt for choice, but let’s begin with a unique cottage garden and then take a closer look at a contemporary pleasure garden, a famous landscaped garden and an artist’s garden.

The cottage could be more accurately described as a spacious Tudor farmhouse set in nine acres of extensive romantic gardens and orchids. As I’m sure you all know, Anne Hathaway was the wife of William Shakespeare and this is where she lived as a child, a short distance from Stratford on Avon. This is a ‘picture perfect’ image of an English country cottage garden, overflowing with carelessly arranged fragrant flowers and shrubs that produce a kaleidoscope of colour. The dense planting lends it a certain charm and a sense of spontaneity, both often lacking within the grandeur of more formal layouts. Popular favourites would include roses, hollyhocks, lavender, pinks, love-in-the-mist and clematis, together with an abundance of living willow structures. It goes some way towards explaining how flowers and plants became such an effortless part of Shakespeare’s language.
In 2016, it was the 400th anniversary of Shakespeare’s death and a new feature was added called Miss Wilmott’s Garden so named after the dedicated Edwardian gardener who first designed cottage style planting in the 19th century.
So, the next time you see a perfect thatched cottage with a profusion of dense colourful flowers on a calendar, it’s probably Anne Hathaway’s Cottage Garden.

The Alnwick Garden is next to Alnwick Castle, home to the Duke and Duchess of Northumberland. It features themed plantings designed around a central water cascade and covers forty-two acres. It was initiated by the first Duke of Northumberland who employed the celebrated landscaper Capability Brown. After if fell into disrepair, Jane Percy, the Duchess of Northumberland, picked up the baton in 1997. Her intention however was not to restore it to its former glory, but rather to develop it into a contemporary pleasure garden designed for every season.
The cherry orchard is an overwhelming sight as it develops into a never-ending cloud of white blossom in spring, nor can you fail to love the rose garden, featuring as it does over three hundred shrubs with their intoxicating scents. The serpent garden, hiding eight water sculptures, is inspirational and the biggest tree house in Europe is not just for the children! My personal favourite though has to be the poison garden! Behind large black gates, marked with skull and crossbones, lie approximately one hundred plants with narcotic, or even death-inducing properties. Fascinating! I’m positive more than one fiction crime writer will have been inspired by this lethal little plot. 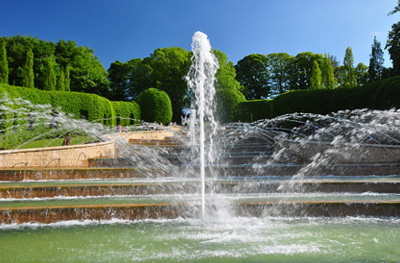 Stowe Landscape Gardens in Buckinghamshire are enormous, both in size, with 750 acres, and importance, with 40 historic monuments and temples. They have been created over the centuries by many famous gardeners, artists and architects. From Charles Bridgeman in the early 1700’s, who created a new style of gardening, to Sir John Vanbrugh in the same century, who was fundamental in laying the groundwork for the many monuments, landscapes and temples. The ‘rock star’ of landscape gardening, Capability Brown, was head gardener there for 10 years between 1741 and 1751.
Of course, the gardens at Stowe have been cultivated with devotion over centuries so that everyone can luxuriate in the end result, but they are not so complex that you can’t take elements of them back to your own garden to build upon. On visiting, you will stroll through miles of beautifully crafted vistas which have emerged from England’s most gifted horticulturalists – they have to be seen to be believed. Truly inspiring for the common man!

This is a Castle Garden designed by Gertrude Jekyll in 1911. Lindisfarne Castle Garden is located on the beautiful and rugged north-east coastline. The actual garden exists on an island (with a causeway) called Lindisfarne, but it is more commonly known as Holy Island due to its association with St Cuthbert. Gertrude worked in tandem with the architect Edwin Lutyens, who, at the same time as she was designing the garden, was turning the castle into an Englishman’s country home.
The garden was designed specifically to flourish in an exposed coastal region during July and August while the gentleman of the home was in residence. It was located to be viewed from the castle, so the fortress, which is a short walk away, is the perfect backdrop for this small, one eighth of an acre masterpiece. Flowers planted include poppies, rudbeckia, sweet peas, cornflowers, marigold and chrysanthemums, to name just a few.
Gertrude was a genius with colour and she made it look like a painting, using every shade of colour, inspired by the great impressionist works of the day. By the time she died in 1932 there were over 400 gardens in Britain, Europe and the USA that she had been commissioned to design, using her immeasurable talents. If you have not already visited Holy Island, it should be at the top of your list.

Whatever your style, to turn your inspiration into reality contact Leeds Garden design today. 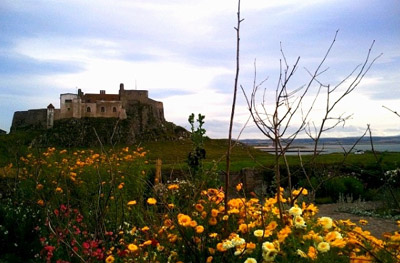