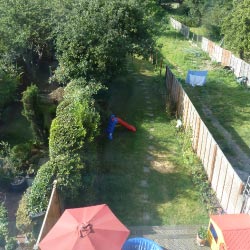 I’ve just returned from visiting a friend in London and whilst I was there she wanted some advice for her garden – not an uncommon request!

She has lived there for three years and now has two young children. They lead busy lives and want a green oasis in their corner of South West London. A couple of years ago she had some work done; mainly removing some shrubs from the jungle at the end of the garden, taking down a Willow which cast too much shade and had overgrown its site and then laying new turf where these had been. Visually it is much improved and it is a bigger and more usable space because of it.

Sadly the ground under the lawn was not prepared properly and consequently it is now uneven. Sadly she hadn’t felt comfortable in asking the landscaper to rectify this problem. It highlights the need for references particularly when undertaking large projects and possibly even meeting the landscapers. Also don’t forget you are the customer; if you aren’t happy be polite but firm and ask the relevant contractor to rectify the problem. 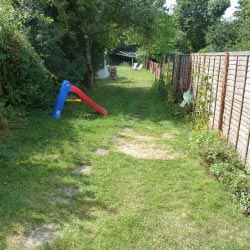 So today she wanted advice on which plants could fill some gaps. Firstly at the far end of the garden in a shady spot some evergreen ground cover plants were needed. The area is about 0.8 metres deep and runs the width of the garden. I suggested Epimediums – they are bright with tiny flowers and after a couple of years they will knit together to fill the space.

Nearer to the house near to the newly laid turf is a space which they felt needed something substantial to gain privacy and provide a focal point when looking towards the house to distract from the neighbours terracotta painted house! Their garden and those neighbouring it, have fruit trees so I suggested a Plum or a flowering Cherry.

Careful repetition in a garden creates a unified space which is pleasing to the eye. In my previous house I planted a Plum in the back garden of my terraced house and it fruited well within a year. I still see it doing well and am pleased I chose it. 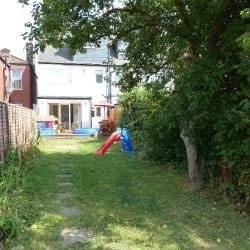 Finally, closer to the house there is a bed running either side from the edge of the decking to about one third of the way down. The left bed needs a bit of pruning but is in generally good shape. The right bed has some pretty flowers but nothing of any height to camouflage the 6 ft fence. Here I suggested a Viburnum tinus which has glossy green foliage all year round and pretty white or pink flowers during winter months.

This will provide a full stop at the end of the bed which will help to even up the currently shrubby left bed. In and amongst the flowers I suggested planting three Lavenders, repeating a circle of them which are planted further down the garden, and a Rosemary and a Sage which are both practical and attractive all year round.

These low plants will give an evergreen structure and the existing flowers will provide splashes of colour at different points throughout the year.

At the rear of the bed an evergreen Honeysuckle will clothe the fence and trellis adjoining the decking, with two Clematis beyond to give the fence a delicate coverage, many flower twice so it is worth looking out for these varieties.

Then beyond the new Viburnum on the last section of the tall fence either an evergreen Jasmine or Honeysuckle both of which will be in the garden, the existing Jasmine is close to the house and thriving.

The suggestions I made are easy to find plants that will grow well in the conditions, a key part of any advice.

You can ask North Leeds Garden Design for help in your garden on a consultancy basis, similar to the help I gave.