It may be October, but it’s not too late to do a bit of autumn foraging. Although the weather in July and August was disappointing for us holidaymakers, it was just right for many of our fruits and berries. Plenty of late blackberries, and other vitamin-packed goodies, have now had time to ripen in the glorious September sunshine. They’re there for the picking along our lanes – and in other places like the edges of golf courses and parks too. 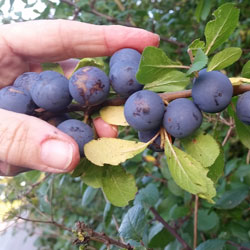 When I was a kid lots of families regularly went out at this time of year to see what foodie treats the hedgerows had to offer. Wearing our most bramble-proof clothes and wellies, on autumn Sunday afternoons my siblings and I competed to see who could collect the most berries or nuts into our Stork margarine tubs, knowing that we’d soon also be enjoying the jams, cakes and crumbles our mum made from them.

Foraging fell out of favour in the 90’s and 00’s; I think people got a bit snobbish about food for free. But it’s much more popular again now, partly because we’ve at last caught on to something that other Europeans such as the French have always known – that wild food is not only free but often has a depth of flavour missing from commercially grown foods. And some foods simply aren’t available otherwise – black truffles for instance have never been grown successfully.

It’s pretty unlikely you’ll come across black truffles in the UK! So what will you find? I was out and about at the weekend and picked several pounds of luscious sloes from blackthorn bushes in a nearby lane. 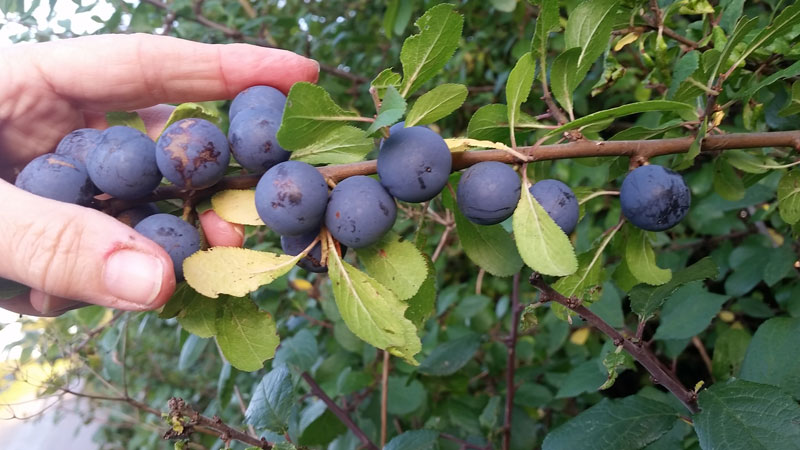 Sloes are a kind of damson, part of the plum family. This year they’ve been the largest and ripest I’ve seen for a while. I’ve now made them into slow gin, which is sitting in a cool dark place macerating gently into a delicious drink in time for Christmas. Chatting to friends, I hear that damson trees in peoples’ gardens have also done well this year, and that damson gin also works very well as a tempting, warming drink!

Blackberries of course have been prolific this September. There’s still plenty ripening nicely, as a result of the showers and sunshine most of the UK has had over the last few weeks. Blackberries are absolutely packed with vitamin C, and are not only tastier than shop bought ones but of course don’t cost you anything. I usually freeze mine – so that I have lots later on in the winter to make into crumble, spiced fruit pies and muffins (like blueberry muffins but much, much tastier!). 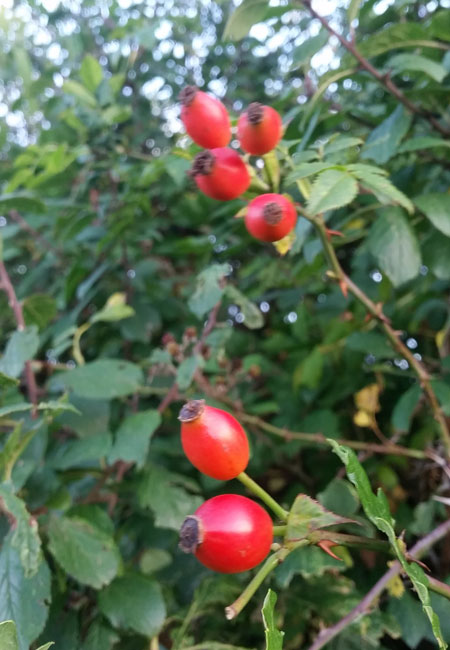 They’re very easy to find when you’re out and about on an autumn walk as their bright red hips just glow in the sun. They can be used to make jellies and jams, and to flavour teas, puddings and pies. My mum used to make rosehip syrup – which is again packed with vitamin C – and give us kids a teaspoon of it each morning during the winter months. We loved it!

You may also find wild crab-apples in hedgerows. These small fruits make a lovely picture when they’re full of fruit – and look lovely in the springtime when they’re in blossom too. We often use them in our garden designs as they not only look great but give you a harvest too. And if you don’t want to eat the fruit they look great polished up in a bowl as part of an autumn display on the dining table. 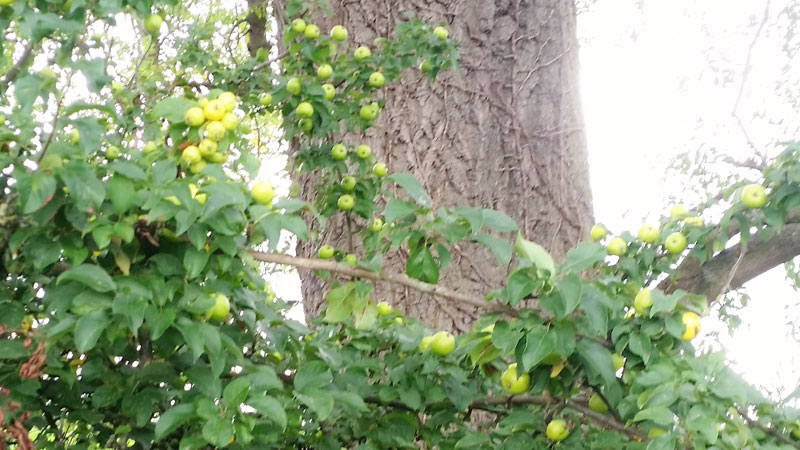 Crab apples are far too sour to eat raw, but they make fantastic crab apple jelly, so tart and full of flavour. Just look on the Internet for a recipe – there’s loads available. If there only appear to be a couple of apples in the tree, look down and you will probably see plenty more hidden in the grass at the bottom of the hedgerow.

Disappointingly, nut trees in our area don’t seem to have fulfilled their potential this year. Cobnuts and sweet chestnuts are both found around Yorkshire hedgerows – if you know where to look! – and both fruited prolifically last year. However this year there’s nothing large enough to harvest.

Hedgerows and woodland areas are also good for mushrooming during damp autumn weather. 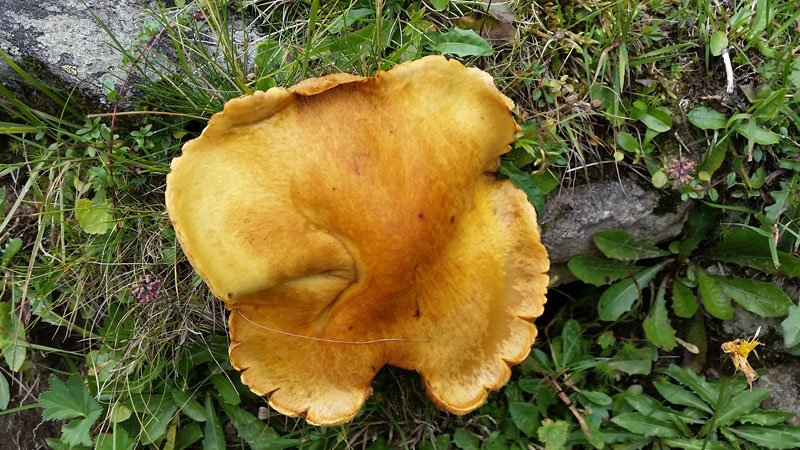 Professional foragers regularly collect wild ceps and other edible mushrooms which they sell on to top London restaurants. But of course many UK fungi are inedible at best – and at worst deadly. There are lots of fungi identification books and apps out there, but given the consequences of getting it wrong, my advice would be to never pick (or even touch) mushrooms without an experienced fungi forager there to advise you. Instead, go along to a local ‘fungus foray’ led by a knowledgeable mycologist and you’ll have a great afternoon out without worrying about poisonous mushrooms.

What can I grow in my own garden?

You can buy blackberry plants for the garden, but be careful where you site them as they need space. They will have a tendency to tip-root, leap-frogging across the ground, unless you prune them carefully and tie the new canes in each year against a fence or wall.

Small apple trees and damson plums are pretty straightforward to grow – even if you only have a small garden or just a patio. In spring you get delicate blossom, in autumn beautiful fruit and sometimes fiery coloured autumn leaves too. As long as you pick one with a dwarfing or semi-dwarfing rooting stock you won’t end up with a tree more than about 3-4m tall at maturity. Buy one from a specialist nursery and they will be very happy to give you advice on what’s suitable for your own garden. My own recommendation for apples which grow well in the northern part of the UK, are Malus ‘James Grieve’ and Malus ‘Sunset’. And for a crab-apple you can’t beat Malus ‘John Downie’.

My own garden apples have been absolutely prolific this year. This morning I picked eight James Grieve dessert apples each weighing more than 200g, plus four Bramleys of similar weight, and the last of my Discovery apples which are a nice size to eat with your lunch. 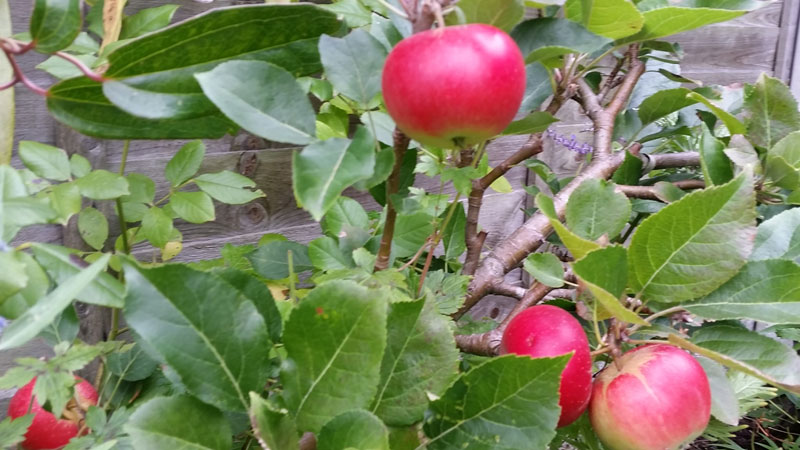 There are some lovely roses which have great ornamental hips in autumn. The best known are probably the Rosa ‘rugosa’ types, with its large, glossy hips. Try the River Cottage recipe for rose hip syrup at https://www.rivercottage.net/recipes/rosehip-syrup.

If you’re putting in a mixed hedge in the garden why not include a blackthorn or two and perhaps a cobnut? They make good hedging plants provided you remember not to trim them back in the summer – you’ll cut off the emerging fruit. And as woodland natives they’ll help attract more birds into the garden too.