A visit to York Gate Garden

There’s always something new to see at York Gate, the renowned garden in Leeds developed by the Spencer family over 40 years. Its design draws inspiration from the Arts & Crafts movement- but its impeccable appearance today is a testament to the many volunteers who keep it looking its best all year round. I live nearby so get to see the garden at every season.

I went back this week to see what the garden has to offer in July. Set in a pastoral landscape and surrounded by trees, York Gate has been designed as a series of interlocking garden ‘rooms’ and narrow hedged walkways. Each is distinctively different but all are characterised by beautifully laid out detailed planting.

The entrance area of the 1-acre garden is a welcomingly-wide circular gravel area, meticulously laid out with concentric circles picked out in paviours and repeated in the gold-coloured evergreen balls behind. 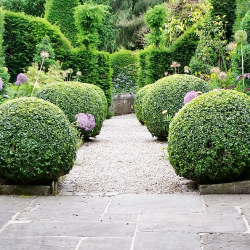 Circles, in fact, are a key design motif at York Gate. Some, like the box balls, are there to see all year. Others come and go; in the Herb Garden today I saw purple allium Christophii like huge purple pom-poms running through the clipped box balls.

And picking up this theme again is Sybil’s Garden, an intimate circular design with two bleached oak benches that appear to hover amongst the lush planting. An amelanchier provides height behind the seating, while the focal point is a low bowl filled with water surrounded by soft pink geraniums. In 2006 this part of the garden was the inspiration for a Gold Medal-winning small garden at Chelsea flower show, called A Garden for Robin, named after Sybil’s son, who died prematurely. 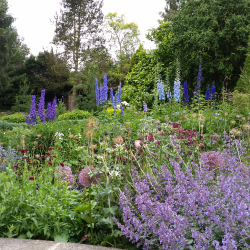 The yew hedge with its huge saw-toothed top always makes me laugh – it feels so wonderfully eccentric! Its echoed here by strident blue delphiniums.

Later in the summer its always covered with the scarlet annual climber Tropaeolum which looks marvellous. Walking past this you come to a long formal pond where water lilies gently blossom. Because the pond is raised I stopped awhile to marvel at the detail within the lily flowers.

Friends will tell you that my list of Top Ten garden plants is always changing. This is true – but at York Gate I can always find at least two or three of my current favourites. This week it was the eryngiums, also known as sea hollies. These wonderful spiky plants come in metallic blues and silvers; after the colours have faded in the autumn they still make an arresting architectural display.

The garden is now owned by Perennial – originally known as the Gardeners’ Royal Benevolent Society – a charity that helps those in need from the horticultural profession, by providing advice and financial support to those who have fallen on hard times. 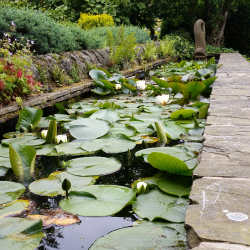 Sybil Spencer bequeathed York Gate to them in 1994, in memory of her husband and son. So your admission money is going not only to keep the garden looking superb but also to help with a very good cause.

To find out more about this splendid garden, and for opening times, location and further information, go to:

Please contact us if you have any garden design questions.