The Garden Design and Architecture of Seville 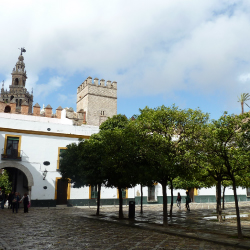 Last weekend I went to Seville for a teaching conference. Whilst there I took the opportunity to explore this beautiful city. We didn’t have a lot of time so we headed for the cathedral which we knew was in the centre of the old town. It wasn’t easy to miss as it is enormous, the largest cathedral by volume in the world – it does make you wonder how many other cathedrals are largest by something or other in the world. On part of the cathedral site is the Moorish tower, La Giralda, this can be ascended and has a series of ramps inside, wide enough for two guards on horseback to pass. It was used by the Moors both for calling the faithful to prayer (the traditional function of a minaret) and as an observatory.

When the Christians demolished the original mosque they liked the minaret so much they kept it but added a bell tower. The design of the tower is beautiful, it derives its simple beauty from the shadows formed by blocks of brick trelliswork (a style known as sebka), different on each side, and relieved by a succession of arched niches and windows.

The other remaining feature of the original mosque is the Patio de los Naranjos, taking its modern name from the orange trees that now shade the patio, this was the former mosque’s entrance courtyard. “Seville,” wrote Byron, “is a pleasant city, famous for oranges and women.” Orange trees are everywhere, you do start to wonder why you pay for them when they are so readily available but then you try one and you realise why, they are unripe and taste so sour as to be like a grapefruit.

From the cathedral we headed into a square filled with more orange trees and the Giralda punctuates the skyline which on our sunny day was beautiful. From here we went through to the Jewish quarter where stunning rendered walls in shades of burnt orange, dusky pink and bright white capture the eye, the contrast with a row of clipped, dark green Box and Ivy above is beautifully simple. 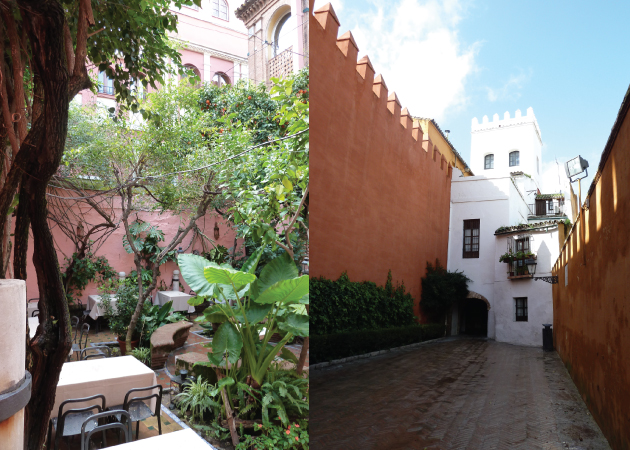 Hidden around another corner was an amazing courtyard garden which now serves as a restaurant, lush planting including banana plants and ferns and the ubiquitous orange trees, contrasted with a climbing passion fruit and pink jasmine, who wouldn’t want to eat in this fantastic enclosed garden. I imagine at night it would have some excellent but subtle lighting, the plants casting shadows on the pale pink rendered walls and maybe some fairy lights for that element of fun. Any outdoor space will come alive at night with carefully chosen lighting, it is always worth considering when designing a garden. You may think you won’t use the garden outside in the British climate but viewing the garden from inside can be equally as interesting. For example the uplighting of a tree or some subtle coloured lights in a pond can add a focal point in the evening. And on those rare occasions where the rain stays away you can enjoy your garden for longer.

The following day as I ate my breakfast outside a café I spotted another contrast of colours in render with some perfectly placed Aloe Vera plants, the buttermilk and burgundy coloured wall framed the bright blue sky in which the plants sat.

Design inspiration can be found in many different places and by taking photos of everything – the advantage of a digital camera – those images can translate into the starting point for a garden design or maybe help us with the kind of things you would like in your outside space. 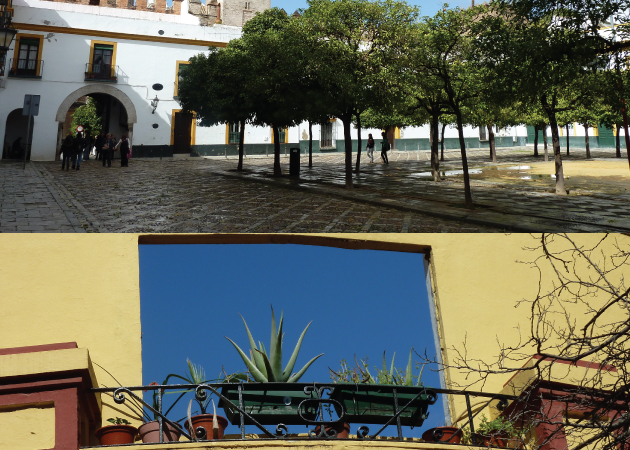